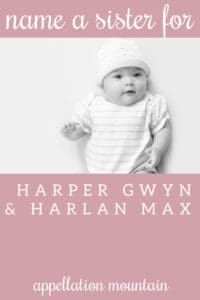 We’re now expecting our third child and need a name for her.

Our five-year-old daughter is Harper Gwyn. Our three-year-old son is Harlan Max, but we always call him simply “Max,” unless he’s in trouble, of course.

So far, we’ve come up with Charlotte/Charlie, Hattie, or Magnolia/Maggie.

This is a puzzle, isn’t it? Because there’s an obvious pattern in Harper Gwyn and Harlan Max, and it feels like the first question would have to be: can we find another name that starts with HAR? Or at least H?

Except that’s NOT the way you refer to your kiddos. They’re Harper and Max. Those names are nicely compatible, with no overlapping sounds.

And then there’s this: if I think about sister names for Harper, I doubt I’d think of Charlotte or Magnolia. Harper strikes me as modern and tailored, while Charlotte and Magnolia feel a little more old-fashioned.

But there’s no rule at all that says sibling names have to match! And Harper and Charlotte actually do sound pretty compatible, I think.

Except if I heard Harper, Max, and Charlie, I’d feel fairly confident that Charlie was a boy, because it sounds like such a brother name for Max.

And so I think I’d rank your current choices this way:

And yet … I think it sounds a little too close to Harper with those rhyming first syllables and I wonder if there’s potential for having to explain that Charlie is your daughter. (Though, really, I’m probably overthinking that last one. Feel free to tell me so.)

It would work, but I have enough hesitations to put it at the bottom of the list.

Harper and Magnolia do both lean a little Southern, I think. The first because of the legendary novelist; the second because of the flowers. (And now, of course, the design empire owned by Chip and Joanna Gaines.) That makes them more compatible than their sounds much suggest.

But I wonder if Harper ends up sounding like the odd one out: Harper, Max, and Maggie? Max and Maggie pair so very perfectly that Harper stands out.

I haven’t mentioned Hattie yet, but I’m loving it with Harper Gwyn and Harlan Max. She’d share her older siblings’ first initial. And while Hattie is more of a vintage gem, somehow I like it quite a bit with Harper and Max. Harper, Max, and Hattie.

Maybe I should point out that Hattie is traditionally short for Harriet, and Harper, Harlan, and Harriet is a trifecta of HAR- names that feels like it would never work … but it does. Because Harper, Max, and Hattie are just plain great together.

So is there any name that beats Hattie?

It’s a spare, trim name like Gwyn. I think the style bridges Harper and Max nicely.

Nature name Ember is on the rise, as is surname name Emery. I thought about either of those, but Embry feels like the best of both, with built-in nickname Bree.

Classic Hannah is falling in use, a Top Ten favorite from the 1990s. But spell it Hanna, or even Hana, and it looks a little different. Possibly Arabic or Japanese, though plenty of Slavic languages prefer this slimmed-down spelling, too.

I’d initially thought to suggest Helena as a sort of middle ground between Harper and Magnolia. But I wonder if just Lena is more your style?

Another attempt at splitting the Harper/Maggie difference, with sleek surname name Marlowe. Spell it Marlo and it’s more retro. Another bonus? All three of your kiddos share at least one initial.

A mix of Winnie and Scarlett, Winslet sounds whimsical and tailored at the same time. The upside: just say “like Kate” and everyone knows how to spell and pronounce it. The (possible) downside: being asked “like Kate?” a zillion times.

Overall, my favorite is Hadley. It gives your children a shared first initial, and Hadley shortens to Hattie (or Haddie?) beautifully.

But then again, if you plan to call her Hattie and that’s the name you really love best? I think it works every bit as well on its own.

Readers, what would you suggest for Harper and Max’s new sister?