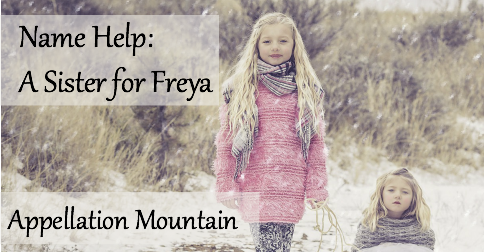 My husband and I have a daughter, Freya, and we hope to give her a little brother or sister soon.

We really love Freya’s name and if we were to have another girl, I can’t think of any other names I love as much. We don’t have many rules, but we tend to go for cool Scandinavian names and quirky classics. Names we considered for Freya include Theodora, Beatrix, and Margaret, nickname Maisie. We ruled out Matilda (husband doesn’t like it), Lucy (too popular), and Reverie (too out-there).

I’ve been thinking of Marit as it has family significance, but I’m not totally sold. I’d love to hear other ideas.

Our last name is similar to Olsen.

Read on for my response – and please leave your helpful suggestions in the comments. 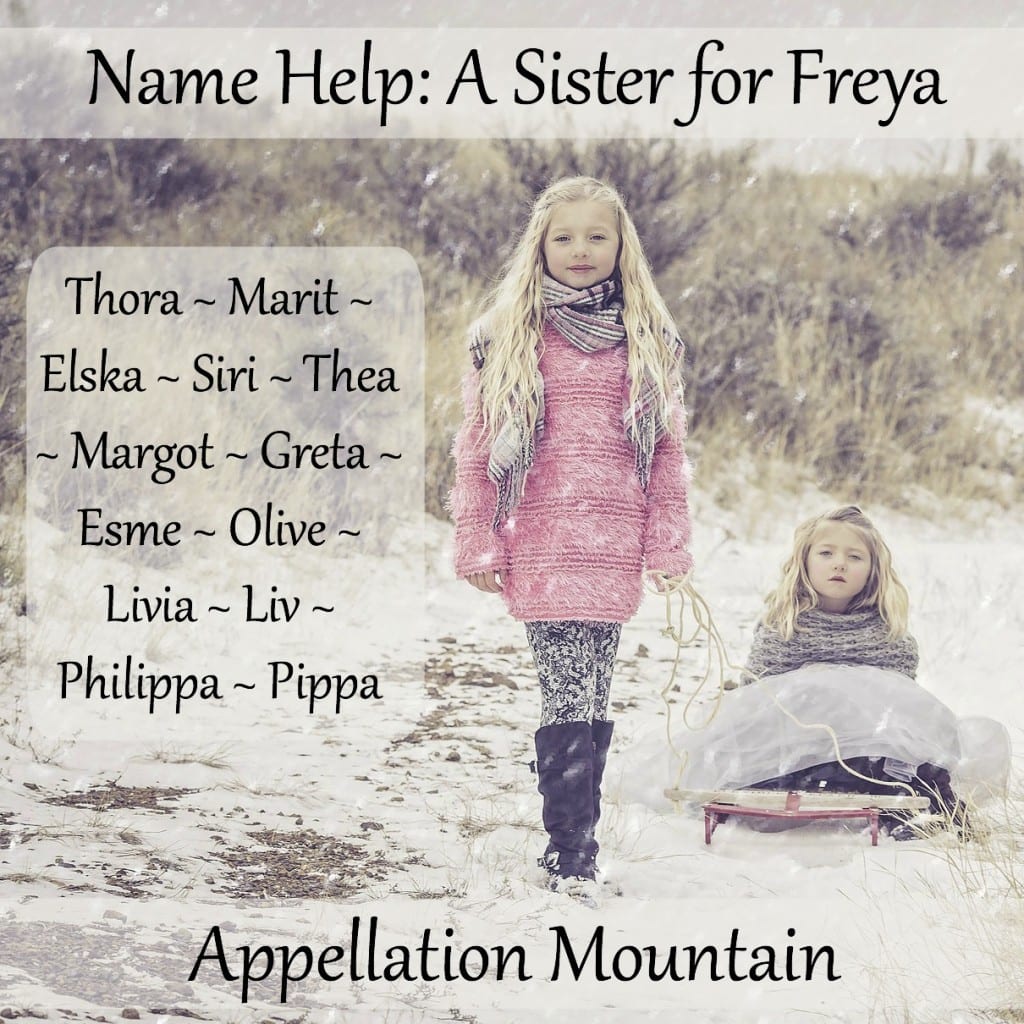 I’m still trying to think of a clever name for this syndrome: we-used-our-favorite-name-for-our-firstborn-and-now-nothing-else-comes-close.

If your next baby is a girl, there are some great Scandi heritage choices that would wear well in the US, with the same familiar, but seldom heard quality as Freya. I think Marit is definitely one of them, and a few more come to mind immediately. But here’s the question: do you think you’ll have more than two children? Because if there’s ever a third girl to name, you might feel a little locked in to heritage choices.

That’s not a bad thing, of course. But it’s something to consider.

So let’s start with a few Scandinavian-inspired choices:

Thora – You mentioned Theodora, a lovely, vintage possibility. Thora shares many of Theodora’s sounds, but makes it far more Norse. I think Thor is probably a tough name for a boy to wear – even before The Avengers and a hammer-wielding Chris Hemsworth. But somehow Thora escapes all of that superhero baggage. Maybe it’s because the name sounds like vintage favorites Nora and Cora. I think Freya and Thora pair beautifully together.

Marit – I think Marit would wear well in the US, though it might take some repetition and maybe even explaining. (A challenge with nearly any uncommon name.) It’s still used, especially in Norway, as a form of Margaret. The current crown princess of Norway is Mette-Marit. Marit has the same tailored feeling as plenty of current favorites – it’s a little bit like popular surname-names Madison and Harper, but far less expected.

Elska – The downside of Elska is simple and obvious: it would be misunderstood as the equally Scandi Elsa. Maybe a lot. The upside? It’s a quirky literary Norwegian word name with an edgy, unexpected sound. Elska ultimately comes from an Old Norse word meaning love, so it’s got a great meaning, too.

Siri – Yes, Siri is the talking assistant on every iPhone. But it’s a traditional Scandi name, derived from Sigrid – beautiful victory. I’ve known two women with the name Sigrid, and I think it’s quite lovely. But I wonder if Siri is the more obvious choice, a mix of the very modern and the traditional.

There are more options in this series by British Baby Names.

Now, let’s consider a few possibilities that lean more to the vintage side:

Thea – If you like the idea of Theodora, but aren’t sold, maybe Thea would appeal? With Theodore and Theo rising for boys, this feminine form has been catching on, too. Thea re-appeared in the US Top 1000 at #775 in 2014. Freya and Thea – I can’t decide if the similar endings make them sound just right or a little bit too close. Margot – Since you’ve been talking about Margaret and Maisie and Marit, I wonder if you’ve seriously considered Margot? Freya and Margot sound just like sisters to me, and I think Margot has the right vintage vibe. Since it sounds like a form of Margaret is on your family tree, there’s also Greta, originally a short form of Margaret which is used in several languages. But it’s also slightly Scandi thanks to screen legend Greta Garbo.

Esme – Literary Esme started out Scottish by way of France, and masculine, too. But the name is solidly feminine in the last century or two. JD Salinger used the name for one of his characters, cementing the name’s vintage vibe. It’s recently entered the US Top 1000, but it’s been big in the UK for years. Freya and Esme sound quite stylish together – on sound alone, it’s my favorite combination.

Olive or Livia nickname Liv – One of the names that I wanted to suggest in the Scandi list was Liv. It’s an Old Norse name that happily matches up with a modern word meaning life. Except Liv seems short compared to most of the name on your list. But you could have your cake and eat it, too, with a given name that leads to Liv. You mentioned that your last name is like Olson, so Olive like-Olson might be too much. There’s also Livia, which seems like antique than Olive, but is an ancient Roman name with history aplenty.

Philippa, nicknamed Pippa – One last thought – since some of the names on your list are longer, I wonder if you’d consider Philippa? It’s quirky and vintage and vaguely British, especially thanks to Kate Middleton’s sister, Philippa, known as Pippa. Pippa is a great short form, and it also brings to mind one of the best known Swedish children’s books, the immortal Pippi Longstocking.

Readers, what would you suggest to Ashleigh and her husband? I’m sure I’m missing lots of possibilities. Do you think the Scandi names work better, or would you be inclined to choose something more vintage?