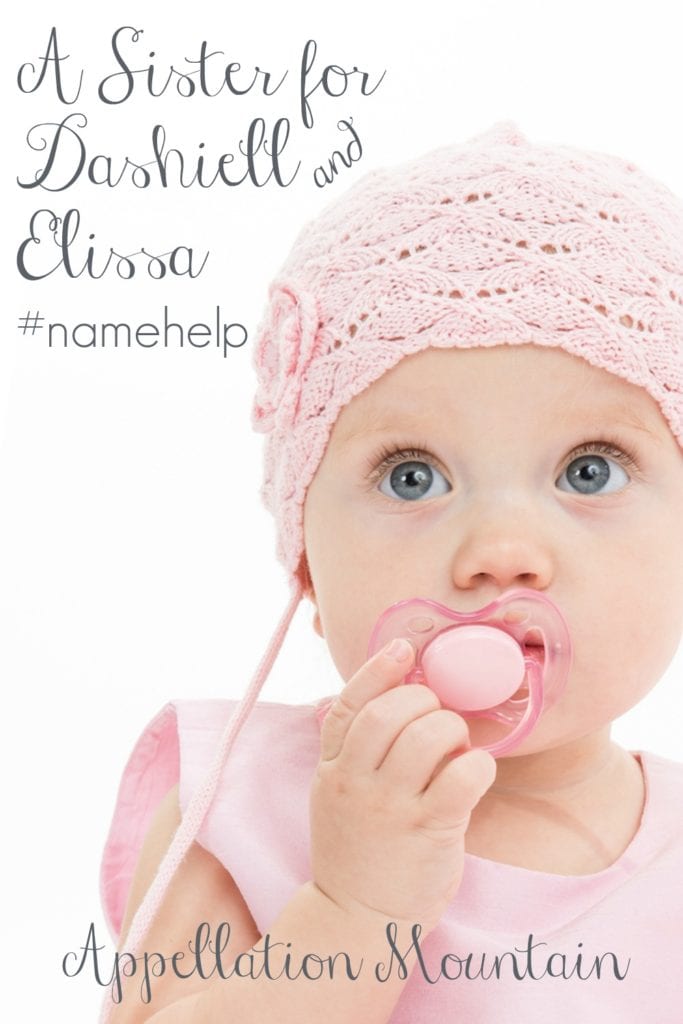 I’m a Jessica who went through too many years as Jess K. My husband Tom doesn’t mind being the third Thomas in his family, but I think it is confusing.

I want my children to have names of their own.

Our son is Dashiell Henley H—er, our daughter is Elissa Morgan H—er.

Some people get Dashiell wrong, but mostly I’m happy with it. But Elissa, as much as I still love it? Grrr! We get Alyssa, Melissa, Eliza, Alicia … and others.

She is almost 3, and I worry that she will hate her name growing up.

We are expecting a daughter in January. I want to find a name that is different, but still easy to understand. Most of the names I like are longer, and I don’t like to shorten them. We don’t really have any ideas, because every name I think of turns out to be more popular than I want.

Please read on for my thoughts, and leave your own helpful comments in the suggestions.

Oh, the challenges of unusual names! Even when a name appears to meet our personal standards for slightly different, it might not be perceived that way by the rest of the world.

It also strikes me that many obvious choices that fit the different, but easily understood, category are word names. Harvest or Saffron, maybe. But I don’t think those match your style, and they definitely don’t sound like siblings for Dashiell and Elissa.

Place names might be an option – but without knowing where you’ve traveled, or have family ties, it can be tough to imagine what might feel like a good fit. Still, I’m going to include one on my list.

Let’s jump right in, shall we?

Luella – Lately, Luella keeps coming up. Most recently, the name featured in the column I write for Nameberry. On the downside, Lu- names for girls are enjoying a moment. That means you’ll run across plenty of girls called Luna and Lucy. But nothing really sounds quite like Luella, and if you don’t mind explaining the spelling – betcha you’ll get Louella at least some of the time, too – it could be an interesting stands-out/fits-in pick.

Ravenna – Let’s look at the map! Ravenna sits in northern Italy, a city with history galore. If you’ve seen Snow White and the Huntsman, Ravenna might bring to mind the evil queen played by Charlize Theron. It also sounds quite a bit like Raven and Makenna and other names that have been popular in recent years, so I think it works.

Katrina – Katrina does not appear in the current US Top 1000. Crazy, right? It feels instantly familiar, and yet a girl named Katrina in 2016 will likely never share her name with a classmate. Now, she might share her name with a teacher. Katrina reached the US Top 100 in the early 1980s. But it’s still a great Kate name that feels distinctive now.

Cosima – Many of us assumed Cosima would soar just a few years ago. That’s because of a few celebrity babies named Cosima, an Orphan Black character, and a few other high profile mentions. But so far, the name remains under the radar. It leans a bit British, and yet I think it could be very wearable in the US, too.

Saskia – Cosima always makes me think of Saskia, an underused name if ever one was. I’ve heard that Saskia can be greeted with a certain amount of confusion. While it is very much a name with a long history of use, few people have heard of it. The upside is that nothing really sounds like Saskia.

Susanna – As with Katrina, I’m forever surprised that Susanna remains outside of the current US Top 1000. Susan just stays in at a chilly #929. I suspect many parents avoid all of the Sus- names because Susie and Sue feel slightly dated in 2016. But if you’re not inclined to shorten your children’s names, Susanna works beautifully. It’s also spelled Susannah. I’m partial to the ‘h’ spelling, but Susanna is slightly more popular.

Marina – Marina charts at #656 in the US. It brings to mind the ocean, but it’s not quite a nature name. It’s close to Maria, but isn’t really related to the Mary names. As with Katrina, Marina enjoyed some popularity in the recent past – in this case, the 1990s. But the name never felt too common, and still feels nicely familiar without being overused.

Romilly – As with Cosima, I thought Romilly was about to take off. And then … it just plain didn’t. There are always a few three-syllable, ends-in-y or -ie names in vogue for girls, from Dorothy to Kimberly to Everly. Romilly started out as a French place name and surname, but today feels like a logical choice for a daughter.

Overall, I think I like Ravenna and Romilly best of all, but I feel like there’s no shortage of options.

Readers, what names would you suggest as a sister for Dashiell and Elissa?