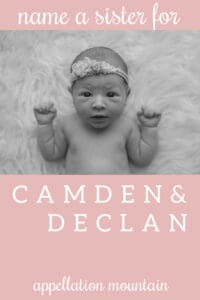 My husband and I are having our third and last baby. Our only girl. I am having a very hard time with her name.

Our names are David and Rachel, and our boys are Camden John and Declan Michael. Both names end with an ‘n’ and both boys have family middles.

We are pretty open with our girl’s names. It doesn’t have to end with an ‘n’ or start with any particular letter. The two-syllable cadence appeals to me, but isn’t a deal breaker.

My husband and I have very different styles for this one. My husband would like something pretty. I’d prefer something that matures well and isn’t too cutesy.

Our two-syllable last name begins with K and ends with M, so a shorter name is probably better.

It’s funny how changing genders can trip us up, right? We should be good at naming after our first child, except naming is different from almost every other parenting responsibility. It gets harder as we gain experience! And it’s very common to agree on, say, boy names, only to discover that you and your partner are miles apart on girl names.

So you’re not alone!

But how do we solve it?

Let’s look at your boys’ names a little more closely.

Camden and Declan are twenty-first century favorites with roots. Could you have met a Camden in 1920s Philadelphia or a Declan in 1880s Boston? Sure. But they’d be rare. Today they’re mainstream. But they’re not Liam/Jackson/Logan chart-toppers, either.

I suspect that will remain true for your daughter’s name – something that’s familiar and current but not common.

Except that we’ve always had a broader definition of what’s acceptable for girls’ names, so the pool of possibilities truly is deeper when naming our daughters.

Balancing pretty with future professional feels harder than it is.

It’s tempting to believe that a name like Millie will mean our daughter is never taken seriously. And plenty of girls with cute nickname-names do grow up longing for something more substantial.

But that’s not necessarily the case. I’m a big fan of the Wikipedia page for state attorneys general. That’s a real grown-up job, one that requires college + law school, followed by professional experience and political savvy. And yet, there are plenty of office holders with names that we once would’ve dismissed as cute, trendy, or otherwise ill-suited to future grown-ups. Ashley, Kathy, Holly. There’s no Misti or Lulu, true. But those names are the equivalent of Layla, Zoey, and Ruby today.

Striking the balance is tough, but if you find a name you love? Rest easy that all names grow up. It’s just tough to imagine your tiny newborn someday taking the LSATs!

A SISTER FOR CAMDEN and DECLAN

One option: choose a name that shares the modern, tailored style of Camden and Declan but is mostly used for girls and comes with a sweet built-in nickname. In this case, it’s Blair Bear – something that will never be used outside of your house, but one that’s playful and fun for her entire family to use. On its own, Blair sounds brisk and confident.

A go-to two-syllable, ends-with-n name for a daughter. Nickname Edie might appeal to your husband, but Eden is very much a current name with deep roots, similar to Declan and Camden.

Sparky, energetic Eliza is a different style than Camden and Declan, but I wonder if it feels both pretty and sophisticated enough for a grown-up? If nothing else, Hamilton has made it tempting to sing out!

I wonder if a surname-style name like Emery might appeal? It’s not at all cutesy – though nickname Emmy could be.

This might seem like a strange suggestion, but if you’re having trouble choosing, maybe looking a little outside your ordinary style could help? Josephine is packed with nickname potential, but no one would consider it flimsy.

Sometimes we interpret names ending with the long E sound as nicknames. I’m guilty of this! But the fact is that plenty of names, even classics like Henry and Mary, end exactly that way. Lucy has centuries of history, a great meaning – light, and a history of notable women with the name. Plus it reduces to Lulu and Lu.

Probably my go-to for tailored girls’ names at the moment, a two-syllable, ends-with-N choice that pairs well with your boys’ names and your surname.

The thing about Rowan is that it’s truly unisex these days. I might’ve recommended it for Camden and Declan’s brother, too. But it’s worth a look, with that bright O sound.

A traditional choice with a tailored vibe.

Wren is sort of in the same universe as Blair – tailored and modern. But it’s not quite as easily nicknamed, so maybe it’s less appealing to your husband for that reason?

My favorites from this list are Eden and Blair, with Josephine and Emery as dark horse contenders.

I’m not sure if that hits the pretty note quite right for your husband. But most of these names do have a sweet built-in short form – Vivi, Ro, Josie – so I wonder if that would satisfy you both?

Readers, what you would you suggest as a sister name for Camden and Declan?