My list of rules for the right name are ever growing! While there are millions – well, dozens at least – of names that are beautiful, we seem to be able to veto every one for one reason or another.

Our son, August Jay, is three. With Auggie we saw the name, both loved it, and knew it was the one. We picked it before we even knew we were having a boy so as soon as we found out, he had a name and an identity.

Since we haven’t had the same experience this time around, we aren’t sure what it’s going to take to fall in love with a name. I grew up with a unique name and I loved that. When we picked Auggie’s name I didn’t think it was very common either.

I still don’t know a lot of Augusts or Auggies but I also realize that it’s trending up and isn’t as unique as I once thought. That’s okay as I do want something on the familiar side of unique.

Based on some of the things we love and “love less” below, I’m hoping you can either help us zero in on one of the names on our list or maybe you have something else that is perfect that we’ve missed.

Names on our list that we haven’t totally vetoed include Jules (Jewel or Julien are potential full names but Jules is preferred), Sylvia, Meryl, Magnolia, India, and Francesca.

Please read on for my reply, and share your thoughtful suggestions in the comments!

August Jay is a great name for your son! When the first child’s name comes so easily, it can be a surprise when nothing feels quite right for another baby.

Here’s what strikes me about your list – while India and Francesca and Magnolia do seem to fit several of your criteria, none of the names on your shortlist satisfy them all. That’s to be expected, and yet I noticed that none of the names seems even a little bit German.

It’s possible that German girls’ names aren’t for you. It’s also possible that honing in on names that are more German, or at least Germanish, might be the way to find the right name. (Or to discard that criteria entirely.)

German can be tricky. Brunhilde isn’t really the kind of name American parents are likely to embrace today. Meanwhile Helena is used in Germany – but it doesn’t really feel German, does it?

Adele – I almost suggested Adelheid, because it gives you Heidi as a nickname, which is fun and expected on a girl today, and I think it’s exactly right with Auggie. But Adelheid could be a unnecessarily complicated spelling for English speakers, and that’s something you’re eager to avoid. In German, Adele sounds more Adela – so perhaps Adela instead? Nicknames could be Addie – which is awfully popular and quite close to Auggie, or Della, Delia, or maybe even Dee or Deedee.

Anneliese – My understanding is that compound names like this are quite out of favor in Germany today. And yet, they’re authentically German and might feel very fashionable in the US. In this case, Anneliese is a smoosh of Anna and Elisabeth. It’s pronounced Annalisa – four syllables. In the US, Annalise is the preferred spelling, and it’s pronounced without the final ‘a’ sound – more like Anna-Lees. Viola Davis plays an Annalise on How to Get Away with Murder. It’s probably enough to put Annalise – or even Anneliese – on the right side of the familiar/unusual graph. It seems more accessible than other compound names, like Hannelore or Lieselotte. (Though Lieselotte comes with the built-in nickname Lilo – swoon!)

Frederica – The more authentically German feminine form of Frederick is Freiderike. But I think this is the much more accessible form of the name in English, and it’s not too far from Francesca. It makes the list because of potential nickname Fritzi. Is it too out there? Maybe a little. But it’s as German as bratwurst, so I thought it deserved a mention.

Greta – Greta, Gretchen, and Gretel are all short forms of Margaret – typically Margareta – in German. If you’re looking for a nickname, there are two ways to go. First, use Margaret (or Margareta, though that’s slightly alcoholic in the US) and bestow Greta as the nickname. Or, use just Greta and opt for a nickname like Gigi.

Lorelei – This is the first name that came to mind when I read your letter, with the nickname Rory. Is it a stretch? Maybe, but it’s one that beloved televisions series The Gilmore Girls made completely workable. The series, by the way, spelled the name Lorelai. It’s the name of a siren-like creature from German myth. My understanding is that it’s not traditionally a given name in Germany, though it seems to be gaining in use there, too.

Milena – It doesn’t feel German, does it? It’s more traditionally associated with Slavic languages, and yet, I plucked this one from the current most popular names in Germany. Milena shortens beautifully – Millie, Lena, Mila.

Petra – Another one along the lines of Greta, but Petra isn’t short for anything. It’s the feminine form of Peter, used in many European languages – but never terribly common in English.

Saskia – I think of Saskia as Dutch, but this name is heard in Germany, too. It comes from the German sahs, the kind of knife carried by the tribe called the Saxons. Saskia reminds me of India and Magnolia from your list. Another name along the same lines is Sabine or Sabina.

Now let’s step away from all things German-inspired and take a look at some other names: 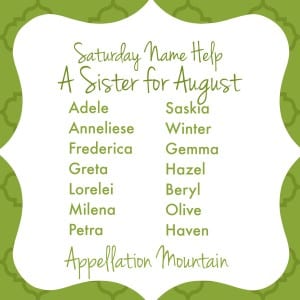 Winter – Would August and Winter be too much as siblings? I’m not sure, but Winter seems like it’s on the right side of familiar.

Gemma – Jewel and Francesca make me think of Gemma.

Hazel – Is Hazel too popular for you? It reminds me of Jewel, and if you like Jules, I wonder if you’d like Haze – Hayes? – or Hazy for a nickname?

Beryl – If not Hazel, perhaps Beryl? It’s very close to the tailored Meryl, but brings to mind the early aviator and adventurer Beryl Markham. I’d shorten it to Bebe. (And Meryl to Mimi!)

Olive, Olivine – Tailored Olive is following the epically popular Olivia up the charts. Olivine – a mineral/color name – is as rare as they come, but should be familiar thanks to the popularity of the other Oliv- names. They shorten beautifully to Liv, and they’re definitely word names.

Haven – Haven isn’t as out-there as it once was, thanks to Jessica Alba’s daughter, as well as the name’s fashionable sound. The downside? I’m not quite sure how to shorten this name.

There’s not much overlap between the two lists, is there?

My favorites for August’s sister are Hazel from the second list and Lorelei from the first. Lorelei ranks in the 400s in the US, while Hazel is just outside the US Top 100. That makes me think that Lorelei might be the better name.

August and Lorelei – Auggie and Rory. I think it’s a great combination.

I also think that Jewel called Jules is a fabulous thought from your list, and Meryl called Mimi seems like another strong contender.

But I know that the community will have even more ideas!

Readers, what would you name a sister for August Jay, bearing in mind Jocelyn’s list?