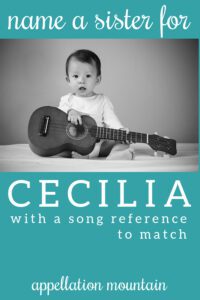 Maybe this is a little extra, but I’m trying to come up with another girl’s name from a song. Ideally, it would be the song title/part of the title.

My name comes from the Allman Brothers song “Sweet Melissa.” It was kind of perfect, because I was born many years after the song came out. So I’d hear it sometimes, and knew it was “my” song, but it wasn’t like being named Bruno right now, with everybody singing it to you.

Cecilia was my husband’s suggestion, but I immediately loved it because of the song. Same thing – no one assumes it’s because we’re huge Simon and Garfunkel fans, but it’s kind of fun when we hear it.

But our second baby is a girl, and I’m feeling like I don’t want her to be left out. It’s possible we might have a third child in the future, and if it is our James, we’d have two out of three song title names.

Maybe the problem is that I want the song to be old enough that it’s not obvious. But I still want the girls to both feel like we hear their songs. (My older sister didn’t have a “song” and she’s still kind of mad about it!)

Can you help us think of more names that 1) are from song titles; 2) sound good with a last name that sounds like Burr-Dine; 3) are the kind of thing that you might hear at a baseball game but also would hear in real life without thinking it was from the song? (I know that last one is tricky!)

I feel like I have been waiting my whole life for this question!

As it happens, I know a family with a similar situation – though their older child’s name (sort of) comes from a (mostly) obscure song reference with meaning to them. They chose Cecilia, in part, because it gave her a song, too!

It’s tricky, though, because you’re looking for a name you both like that happens to come from a very brief list of song titles.

That means your ultimate decision will be a trade-off. What’s more important to get right? The song reference, or your daughter’s name?

I think it might be possible to do both, but I do want to encourage you to feel okay about choosing a more obscure/contemporary song if that solves the problem for you. Will it be exactly fair? No. But pop culture evolves. There’s no guarantee we’ll think about all of these songs exactly the same way in another twenty years.

But, oh, I want this to work out for you!

“Hey There Delilah” from the Plain White Tees only became a hit in 2007. But I expect we’ll still be hearing it in 2037. At least, I still catch it on satellite radio all. the. time. And it’s been fifteen years already. More reasons to consider it: it sounds balanced with Cecilia; the song is broadly positive; and if Layla, Lola, and Lucy are on your list, then maybe you’ll like the L sounds, too.

Again, this 1998 song is on the younger side. But really not by much. And if this Goo Goo Dolls hit has survived nearly 25 years, it will probably still be around in another 25. It’s romantic and dramatic, but Iris has plenty of strength, too.

Confession: I don’t think I heard this 1980 song until sometime in the late 1990s. And I wouldn’t put Donny Iris in the same category as the Beatles or the Stones. But it’s an enduring name for a daughter, just like Cecilia.

With Ruby, you can pick your song, genre, and era. Kenny Rogers? The Kaiser Chefs? My first thought is the Rolling Stones, because Ruby Tuesday is just fun to say. (Though there’s the chain restaurant, too, so maybe that’s a minus. Though Cecilia would have Cici’s Pizza.) It reminds me of almost-not-quite Lucy, but it’s different enough from Lucy that it works with your older daughter’s name.

I think you’d be less likely to hear “Stella Blue” in the wild. The Grateful Dead weren’t known for their radio hits; even so, this song is a little more obscure than, say, “Truckin'” or “Shakedown Street.” But, but, but … how great is Stella Blue as a first-middle combination?

Strictly speaking, it’s Susie in the song titles. “Wake Up Little Susie” by the Everly Brothers is my first thought. But there’s “Susie Q” by Creedence Clearwater Revival, too, plus “Oh! Susanna.” The latter gives me pause, because I can imagine people singing that one to your daughter, more so than the others. But how great are Cecilia and Susanna together?

I’m thinking of the Amy Winehouse and Mark Ronson cover of The Zutons’ song. Strictly speaking, it’s new – dating to 2011. (2006 if you count the original version.) But Steve Winwood used the name in a song title earlier. So did The Monkees, though they spelled it Valleri. (I think that last one matches the tempo and spirit of “Cecilia” well.)

Back to The Kinks. Everyone knows Lola, but I’m a fan of “Victoria.” It’s about the Victorian era, but his regal and commanding name remains nicely wearable. The problem, of course, is that it’s less likely to be heard out and about – so maybe that rules it out.

My first pick is still my first suggestion: Delilah. I think it hits the right note, both in terms of sounding like Cecilia’s sister and achieving song parity.

But Ruby is a close second, and I think it would be great with your older daughter’s name, too.

Readers, what would you name a sister for Cecilia? Song references strongly preferred!