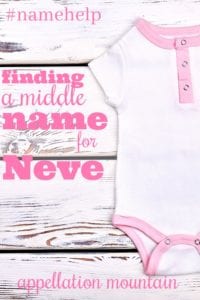 I hope you can help me with my name dilemma!

We have almost fully agreed to the name Neve (pronounce the Portuguese way, Nev). Neve is a name I’ve loved since I was a little girl, and the meaning – snow – is special to us.

But, we have a few problems. One is the pronunciation. It’s always been my assumption that people would know it’s Nev, but my mother pointed out she always thought it was Neeve (like Niamh). Do you think we will deal with that her whole life? Aside from Neve Campbell, I’ve never met a Neve (or Niamh for that matter) in real life, so I have no idea what the general consensus is on pronunciation of our chosen spelling. Should that be a deal breaker?

The second problem we have is that we have a long Dutch last name that starts with Van. Now I’m thinking there’s too much V sound (is this a deal breaker too? How does it sound to you?), and we are also having issues finding a good middle name that fits with Neve and our last name. I’d love it if you and your readers could help me with middle name options. I can’t decide if the middle name should be long and more feminine, or shorter and more the style of Neve.

Hope you can help us! Part of me feels like if I’m overthinking it this much, then maybe it’s not THE name for us, but the thought of not using it makes me very sad. Thanks for your help!

How exciting! Neve is all kinds of lovely, and it sounds like it’s both your favorite name, and a name rich with meaning. I can’t think of a good reason not to use it.

Well, wait. There is potential for confusion about pronunciation.

So it doesn’t seem like reason enough to choose a different name – unless, of course, you personally find the idea of pronunciation hassles deeply frustrating.

As for the repeating V sounds? That’s a matter of personal preference. But I know a family with a strong ‘v’ sound in their surname, and their kids also have strong ‘v’ sounds in their first names. A little bit of repetition makes a name pleasing to say, and easy to remember. In this case, I think it works just fine. (Note: I can see their surname from Cristina’s email address, but I generally don’t share them.) I suppose, if someone read her name quickly, it might sound like Nevan LastName instead of Neve VanLastName. But I’d say your strong attachment to the name outweighs the occasional mishearing.

Now, on to the fun part: middle names!

I’m most drawn to Neve Josephine, followed by Neve Rosalie, Neve Fiona, and Neve Felicity. There’s something memorable about a short first followed by a three-syllable (or longer) middle, especially when that middle isn’t the staple Elizabeth.

And I’m inclined to avoid the ones that start with softer sounds, like Amelia, because they do run together in a way that seems less appealing. Likewise, the M middles might seem a little too harsh. But those aren’t rules – just my reaction, and I’m sure others will make a convincing case for Neve Magnolia or Neve Amelia.

A few other suggestions:

Overall, I still don’t think anything can top Neve Josephine!

But readers, over to you. Would you use Neve with a surname starting with Van? And what kind of middle names sound best?