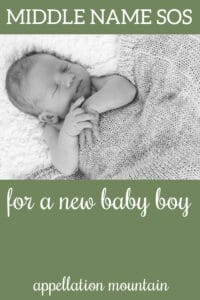 I’m hoping you can help with our name dilemma. We had our fourth and final child in September and he was SO hard to name! And now I’m not sure we chose the right name for him: Aleks@nder Bl@ise.

We live in the Czech Republic, and my husband is Czech, but I’m American. We may live in the US in the future.

The Czech Republic only allows for a first name, or a double first name – no middle names! They also require that any name used must be found in Jak se Bude Vaše Dítě Jmenovat? It’s their official name book. (Technically, Bl@ise isn’t in the book, but we’ll be able to use it.)

We can add a middle name on his US birth certificate, and we have some time to decide.

We originally planned to name him Aleks@nder Bl@ise and call him Bl@ise. However, I feel unsettled about the decision. Other people are already calling him by different nicknames for Aleks@nder. I have no problem setting people straight in real life, but it’s raising some more doubts.

Plus, while I’ve loved Bl@ise for ages, I’m now afraid that people will just hear “blaze” and not take him seriously later in life. Will we doom him to Top Gun moments of “Maverick? Did your mother not like you or something?” Tough, edgy, cool guy names just aren’t us and are definitely not this baby. I love Bl@ise for St. Blaise and Blaise Pascal.

Other names we considered:

Alois – We’d call him Louie. It’s Czech, and we like it, but it never felt quite right.

Augustine – we have loved this since early in the pregnancy and still do, but we don’t like Auggie and Gus and they felt too inevitable.

Basil – A last minute possibility. My 13-year-old says she’ll call Bl@ise Basil (pronounced like the herb) because the sounds are all there and that I do love!

Benjamin – My longtime favorite that really does hit just the right tone, but popularity scared me away. In Czech a Benjaminek is a rookie/youngest player on a team, and so he’s the “Benjaminek of the family,” which is so sweet. But are the initials ABB too much?

Ernest Hugo – Our grandfathers’ names. Neither were considered for first names, but we like them together as middles.

Isaac – My husband’s favorite. I like it a lot too, but it’s also quite popular and my sister has a dog named Ike (not a deal-breaker, but the connection bothers me a bit.)

Ives – We considered Isaac Victor, because he’d be IV – the fourth, which I still love. Victor is a family name. Ives would be another fun way to include IV.

I’d be so grateful for your fresh perspective and any suggestions.

It sounds like your best option is to add a bonus middle, even if it only exists legally on his American documents. It might give you additional flexibility around what to call him now, and would certainly give your son more choices into the future. There’s really no reason NOT to add one (or more), right?

As for the name, I think the decision is easier than it looks:

It’s your longtime favorite. The idea of this son being your family’s Benjaminek is just so sweet. And while the repeating Bs is a lot, it’s barely noticeable in the middle.

Now let’s talk about what you’ll actually call your son.

Your hesitation is reasonable. That line from Top Gun!

But, but, but … this is the age of bold word names. At least in the US, Maverick is about as popular as Charles or Thomas, Lincoln or Miles, Josiah or Isaac.

That means that Maverick, more and more, just sounds like a name, stripped of its too-bold meaning. I’ll be surprised the first time I meet an accountant named Maverick … and yet, it will happen. It opens space for more bold word names, like Legend (just outside the current Top 100 in the US) and Messiah (Top 200 in the US).

I’m guessing people who know your family will mostly think think Pascal or Saint Bl@ise when they hear your son’s name.

The hurdles come later, when your son is off on his own, on a college campus or in the workplace, where maybe it’s not as obvious that his name was chosen for its rich history.

At that point, though …

1. Your son might become a completely different person than you expect. My firstborn? Is a varsity athlete in a team sport. It’s so unexpected that we joke he was switched at birth. It’s very possible the name Bl@ise could suit your son in all sorts of unexpected ways.

2. In any case, the definition of a normal name shifts over time. My guess is that Bl@ise might have to spell his name more in the future, but it won’t be perceived as different. Just like I think of Craig and Bryan and Brad as normal names for 40-something men, we will someday think of River and Cash and Jett as grown-up names.

3. And, of course … your son already has at least one back-up name waiting. It’s easy enough to go from being A. Bl@ise to Alek@ander B. Or from Bl@ise to Alex. Or Bl@ise to S@sh@. Adding in a bonus name like Benjamin (or Isaac or Ives) just increases his options.

One other thing: it sounds like your son’s name is the result of careful consideration and lots of compromise. Which is great! But it can feel far less satisfying than a lightning bolt moment.

The reality is, of course, that not every naming process leads to a moment of clarity – at least not right away.

And that’s so hard, especially if names have come easier in the past.

Readers, over to you! Am I wrong about Bl@ise feeling like a normal name? Do you think there’s another bonus middle that works better?