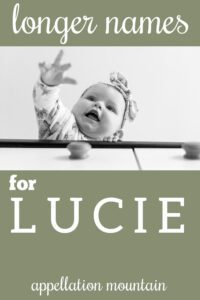 My husband and I are expecting our first baby in January. It’s a girl! I’ve known for years that I wanted to name a future daughter Lucie, and my husband is on board.

And I just don’t like the sound of Lucie Carrie.

We decided that we’ll choose a longer form of Lucie instead, so she has the option, and also so her formal name will sound a little less like a cartoon.

Lucille is okay. Lucia bothers me because of all the pronunciations. I’m not sure about Louise/Louisa, and my husband isn’t crazy about the “weeze” in the name.

What does that leave?

Also, will we regret spelling her name Lucie? I always wanted to be Jenny growing up, like all the other girls, but now I like being a Jennie. And so the ‘ie’ spelling has lots of meaning. (My mom and grandmother also have names that end with -ie, too.) But maybe I’m just setting my daughter up for years of not being able to find her name on anything?!

On the one hand, I get what you’re saying about Lucie Carrie. It’s a little sing-song. And I’m a BIG fan of nickname-rich names.

But, but, but … if you plan to call her Lucie, will you dislike it when she’s called Lucie Carrie at her school assembly?

Or will you get used to it over time, and find that Lucie Carrie sounds just right to your ear?

Just something to mull over.

Because there are LOTS of longer names that shorten to Lucie. You’ve ruled out the obvious choices – Louise/Louisa, Lucia, Lucille – but let’s see if we can find something a little less familiar, but still gorgeous.

From a Latin phrase meaning “pure light,” Lucasta was coined by the poet Richard Lovelace in 1649.

A little longer than Lucia, it’s possibly Luciana could invite some pronunciation challenges. And yet, it seems like a soft C is more obvious in this name: loo see ahn ah.

The French feminine form of Lucien, which comes from Lucian, via Lucius. Rare, but wearable in our Josephine-Madeline age.

A seventeenth century literary elaboration of Lucia, both Cervantes and Moliere gave the name to characters. It’s familiar, but uncommon.

A cousin to Louis, by a long and roundabout path. The letters are there – Lu + c – but Lucy isn’t the most obvious sound to pull from Ludovica. Ludivine is another option, even farther removed from Lucie.

A lovely Lou name, Luella could become Lucie … especially with a middle name like Catherine, Claire, or Charlotte.

Of course, most of these longer names for Lucie are pretty different. Luella just barely cracks the current Top 1000. Luciana is right around the 400 mark. So that might add a different kind of complication to your daughter’s name.

All of that said, I’d probably use Lucinda.

Most people know how to say and spell it.

And it logically shortens to Lucie, no linguistic gymnastics required.

As for Lucie versus Lucy? Yes, it will be an occasional headache – just like it was for you! But it sounds like it would be worth it. You’ll just have to think back through your personal experience and decide whether it means more to share a spelling, or more to make your daughter’s life a small fraction easier.

Readers, what would you suggest to Jennie? Should she use a formal name for Lucie? If so, which one? Any words of wisdom on Lucie versus Lucy?