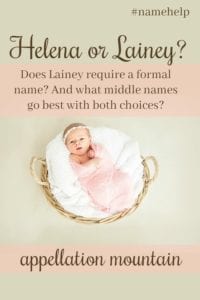 Update: Erica writes that they named her Alaina West!

We’d agreed on Helena called Lainey, but the spelling kept coming up. And the closer I got to my due date, the more it bothered me.

Then Alyssa suggested Alaina. I saw the spelling before, but worried it was too close to Alyssa’s name. But since it was Alyssa making the suggestion, it felt special – and right!

But then it felt like we were leaving out my aunt Helen. West comes from the first syllable of Helen’s surname, so it’s perfect.

We are expecting our first child together, a girl, in a few weeks. Since before we found out we were pregnant, I wanted to name her Helena, nickname Lainey. There are two important women in my life, named Helen and Elaine, so it’s special, but I like that it would still be her own name, not a repeat.

I know that people pronounce Helena different ways, but we are saying it like H+Elaine-uh. I like this because of the Lainey nickname, and also because it’s just how I always thought you said it, at least in the United States. (Though now I’m wondering if I’m wrong?)

But as we get closer, I’m wondering if this is going to be a hassle? At my baby shower, we received cards addressed to Laney and Helaina. And my mom keeps asking me about the spelling. (Not like she’s judging, she just wants to make sure she gets it right!)

Should we name her just Lainey instead? My husband has two teenaged daughters from his previous marriage, and their names are Alyssa and Brianna. They’re long and girly names, and I don’t want our daughter to feel out-of-place with her sisters.

We’re also struggling with a middle name. I thought about Grace originally, because I love the sound and the meaning. But it seems like every other girl has the middle name Grace. So maybe we should keep looking?

Blended families do pose some particular challenges when it comes to naming. But the exact challenges, and the best ways to address them depend very much on individual circumstances. If the kids are close in age, and likely to spend time living together as a family, it seems more important that the names feel like part of one big, harmonious group.

I think your circumstances might be a little different. Assuming Alyssa and Brianna are both at least twelve, then the amount of time they spend doing things together as a family with your daughter might not be significant. But even if that’s not true, I don’t think the mismatch is significant. I can almost hear your husband might rattle off his three girls’ names, rapid-fire. “These are my daughters Alyssa, Brianna, and Lainey.” I wouldn’t raise an eyebrow at all!

With so many years between them, there’s a little more breathing room. I should note that parents who name children together over a long stretch of time often find their style evolving, too – and that’s perfectly fine.

What’s more important, I think, is to ensure that your child’s name doesn’t conflict with her sisters’ names. So Alice is out, as is Bree.

But Helena and Lainey? Both are options that work equally well.

So if there’s no urgency to use Helena to match her sisters’ names, should you use just Lainey?

I can’t tell from your letter if you love Helena and Lainey equally, or if you feel Helena is merely the best way to get to Lainey as a nickname. It sounds like it’s the former, especially since Helena more closely picks up on Helen than Elaine does.

But if that’s not the case, then that’s a point in favor of using just Lainey. If you don’t love the formal name, then it’s fine to skip it in favor of the nickname.

There are a few other formal names you might consider: Magdalena and Delaney both come to mind. But the one that calls to me most strongly? Just Laine. Girls are routinely named Saige and Paige and Sloane. I think Laine fits right in.

To recap: if you love Helena equally much, I’d use it without hesitation, and accept that you’ll sometimes have to spell and explain your daughter’s nickname. If you’re not sold on Helena, then I’d strongly consider the tailored, lovely Laine.

Let’s have a poll, because I think it might be helpful to see how others respond:

Now, on the question of the middle name, though of course, it depends on which first you choose:

I do think a bolder middle name, borrowed from a word name, might be a good choice with traditional Helena. But it’s not necessary, and names like Katherine feel rich with potential, too.

But honestly? I’m drawn to Helena Grace. Helena is relatively uncommon – just 600 girls received the name last year! So I’m not sure you need to re-think this too much.

Readers, what would you suggest to Erica? Formal name or not? And middle name suggestions, too, please!