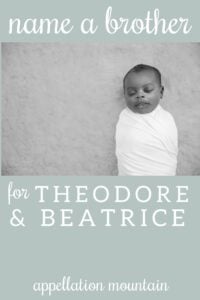 We are expecting our third child – a boy. We already have two children called Theodore and Beatrice, shortened to Theo and Bea.

We are really struggling to find a name which ticks our boxes – a long name which can easily be shortened; a name which will not raise eyebrows amongst grandparents; a great meaning; and a name which feels traditional (Theodore was less popular when we chose it!).

The middle names are likely to be very traditional family names.

And finally, a name which allows them to follow any career path – judge or doctor, artist or rock star.

It is interesting how much our older children’s names define what works for their siblings, right? Obviously, Theo’s brother wouldn’t be Leo, and Bea probably rules out Thea. Oh, which you couldn’t use with Theo anyhow, so …

But yes, naming siblings can feel like more of a logistical puzzle, even when we know what we want!

Happily, there are plenty of traditional boy names with short forms that feel familiar, but not too popular – and great meanings, too!

A BROTHER FOR THEODORE AND BEATRICE

I’m guessing this name is just too popular for you to consider. But … Theo, Bea, and Alex are perfect. (There are other Alexander nicknames, too, if you’d prefer.) Plus, the meaning – defender of men – has plenty of appeal.

Okay, you might use Augustus or Augustine. But August shortens nicely to Gus – or Augie! And it’s got a great meaning – exalted.

Even with celebrated actor Benedict Cumberbatch, the name Benedict remains outside of the current US Top 1000. But it still meets your criteria – it’s a long name everyone has heard of; the meaning – blessed – is great; and it shortens to Ben. Except … are Bea and Ben too close? My initial reaction was yes, but of course, Theodore, Beatrice, and Benedict aren’t too close at all, so … I’m leaving it on the list as a maybe.

I think Frederick is a total neglected gem. British parents have embraced Freddie in a big way, and I think it would wear well here, too. And while those us born before, say, 1997, hear Fred and think Flinstone, the next generations will hear Fred and think Weasley. The Germanic name means “peaceful ruler.”

Despite being a Top 100 name, Jonathan feels uncommon. It also comes with nicknames galore – Jon, obvious, but also Jonny, Jack, Nat, and Nate. It means God has given. (As does Nathaniel, coming up later on this list.)

There are lots of Max names. As with August, it’s tempting to suggest some of the more syllable-rich options, like Maximilian. But Maxwell sounds most like Theodore and Beatrice’s brother to me. It’s traditional, familiar, not wildly common, and still quite current. Max names come from the Latin maximus – greatest.

Nathaniel entered the US Top 100 way back in the late 1970s, but the name never reached the Top 50. And so while I think we all know a few Nathaniels, it never became overused. (Of course, the similar-sounding Nathan did rank as high as #20 earlier in the 2000s.) But the rhythm of Theo, Bea, and Nate feels irresistible. And, of course, it’s worth noting that a more familiar name is automatically one less likely to raise eyebrows with the grandparents – or anyone else! Oh, and the meaning – God has given – is nicely connected to Theodore’s name.

Phineas, on the other hand? It’s probably a little different. And yet, Finn ranks #178, which feels like a nicely familiar, but not too common kind of popularity level. Finn can also be short for a dozen names – Finnegan (#410), Finley (#304), and Griffin (#241). But Phineas, with Biblical roots and a handful of historical uses – might sound more like a brother for Theodore and Beatrice. Of course, the meaning is a little challenging. Phineas is unclear; Finn means fair.

How great is Raphael shortened to Rafe? It’s handsome, traditional, underused … check, check, check. It’s worth noting that Rafael ranks #247, so it’s not quite as rare as the numbers initially suggest. But it’s still far from Alexander. It means “God heals.”

While I’m divided on Vinnie, there’s no question that Vince is quite handsome. (Think Entourage’s Vincent Chase, called Vince by everyone on the series.) The meaning works – to conquer or overcome.

I’m drawn to Jonathan. The nickname Jack would be great, but possibly far too common. Jon, though, is surprisingly uncommon, and Jonny is great for a child.

But I think the total package is probably Raphael-called-Rafe. It checks every box, from meaning to popularity levels. And while it’s probably a little different, my guess is that most people’s reaction would be more “oh, that’s a name I know but seldom hear” as opposed to “wait, is that even a name?”

Readers, what would you suggest for Theo and Bea’s new brother?