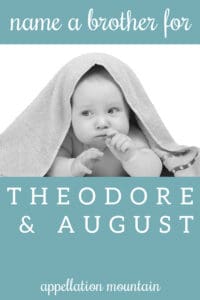 We have two boys, Theodore and August. We call them Theo and Auggie at home. Theo is Theo everywhere, but Auggie is usually August to everyone outside our family. (We thought we would call him Gus, but it never really stuck.)

Our third baby and third boy is due early in 2023, and we have that awful “out of names” feeling that people talk about!

Since we were expecting Theo, our girl name has always been Susanna. We might have a fourth someday, so I wouldn’t want to use anything too similar.

The names we’ve talked about:

What are we missing?

Read on for my response and please leave your thoughtful suggestions in the comments.

The Charlie question is tough, isn’t it? I’m guessing you wouldn’t want to choose something like Charleston, so I agree – Charlie is probably off the list. Wallace and Oliver and Alexander, too.

But I think you’re on the right track. We’re looking for a traditional boy name, with or without a cuddly nickname option.

A BROTHER FOR THEO & AUGUST

I hear your concerns about popularity … and yet, Theo/Theodore ranks pretty highly. And August isn’t exactly rare, either. And so I’m suggesting Benjamin, even though it’s #7 in the US right now. Ben is a rock solid, reliable kind of name, so maybe it’s not terribly exciting. But Benji? Sky high on the cozy-cool charts.

Are you open to nickname-proof names? Because Clark has lots of potential with your boys’ names.

Probably I should’ve suggesting Edward, with Eddie and Ned as sweet nickname options, either at-home or in the world. But Edwin, with that dashing second syllable, seems more appealing. And while it’s very rare, it’s certainly the kind of name we all recognize.

Freddie and Frederick are trending in the UK, and American parents often embrace British favorites a few years later. I think this is the perfect overlooked classic.

Jonathan is falling in use in recent years, while Jack is white hot. The combination might balance everything out nicely. Yes, your son will probably know others Jacks his age, a mix of boys named Jackson and Jax and just Jack, too. But Jonathan-called-Jack is a little bit of a twist.

Full disclosure: Mandy Moore just gave this name to her second son, and his big brother is August. So maybe if you’re big This Is Us fans it would feel a little too fangirl. But Oscar just makes the perfect brother name for August and Theodore, so no surprise it’s heard out there.

Before a traditional name can be cool, it has to feel, well, un-cool. Raymond has definitely been stuck in style limbo for a while. But Ray never really lost its appeal. And now Raymond – which really was a medieval knight kind of name originally – could be ready for revival.

Any name with an X and a V is effortlessly appealing. Xavier is still plenty traditional, though, a fun name to say with history to back it up.

Overall, I keep coming back to Xavier. Theo, August, and Xavier; Theo, Auggie, and Xave. I think you’d find it more like August, where you use his name in full. But it can be easily shortened at home, if you like.

Readers, over to you! What would you name a brother for Theodore “Theo” and August?