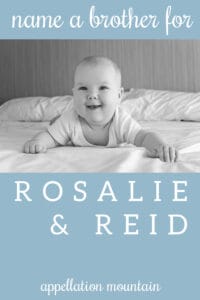 My husband and I are having a terrible time coming up with boys names for baby #3, due in March.

We have a daughter (Rosalie Grace) and a son (Reid Augustus).

If this baby is a girl, we’ve agreed on Julianne.

Boy names are really tough for us, and we won’t know the sex of the baby until birth.

We do not want another R name.

But nothing is jumping out at us. Can you help?

I think knowing that you don’t want another R name is half the battle here. And yet, that still leaves a huge pool of potential names, right?

It also feels like your naming style for a son is just a little bit different than it is for a daughter. Which is true for most of us!

So what sounds like a brother name for Reid?

Out of these, Hugo is probably my top pick as a sibling for Reid and Rosalie. (And Julianne, come to that.)

But let’s see if we can come up with some more ideas.

A BROTHER FOR ROSALIE and REID

Alden meets Taylor. But it’s also a tree name, so it has something in common with Rosalie, and that strong sound brings to mind Reid. Adler is another option.

There’s something smooth about Hayes. Sound-wise, it’s similar to James, or maybe Louis/Lewis. Style-wise, it’s closer to surnames like Reid.

Jonah mixed with Hugo, with a hint of Reid’s strong, single-syllable style, too.

An Irish import less popular than Ryan or Aiden, but with just as much charm.

You might shorten it to just Max, but Maxwell seems like a good balance for Reid and Rosalie.

A longer surname-style name with an unforgettable sound.

A handful of surnames feel similar to Taylor, but are less common. Thatcher is a good choice for a stands-out/fits-in kind of name, but there’s also Thayer, Baylor, Walker, Bridger, and Turner to name a few.

I think Wesley hits the same traditional, but current note as Reid.

One last thought: do you have any interest in using Julian for a son? Obviously, it would rule out Julianne for a future daughter, so it’s not a perfect choice. But if you don’t imagine you’ll grow your family after this child, it might be worth considering.

I really love the sound of Adler, Emmett, or Wesley with Rosalie and Reid. They’re all non-R names, but they still feel like they go together as sibling names.

Readers, over to you – what would you name a brother for Rosalie and Reid?