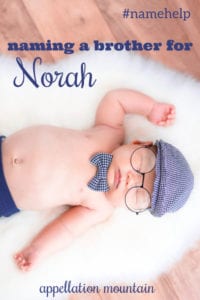 I am a lifelong name geek, so it is probably no surprise that my husband and I came up with baby names we liked fifteen years ago when we were dating: Elinore, nickname Ellie, and Tyler.

When our daughter was born five years ago, we named her Elinore (honoring my amazing great-grandmother, a homesteader and writer), and decided to call her Norah.

But then we gave her two middles and a hyphenated last name, and so six weeks after her birth we ditched the full name Elinore and legally changed her first name to Norah. We figured she didn’t need 5 names and a nickname. Her first and two middles manage to honor two family members, a river we love, a place we love, and two aspects of nature we love deeply, and feels very very us. Her name suits her perfectly.

We both had some intuition our next child would be another daughter, and we had a great list of beloved girl names picked out. At the top of the list was Maren, which feels spare and forthright and wonderful.

Well, surprise surprise, we’re expecting a boy in November! We’ve been absolutely stumped for names. Time feels like it is running out and though we’ve got a list, none of them feel right. And of course we’re doubting ourselves, having changed our daughter’s name a few weeks after her birth.

One option would be to go with Tyler, our original selection, though we’ve picked up a slight negative connotation with that time, and it now feels like a trendy name from 30 years ago, rather than timeless.

My husband’s name is Benjamin, which I think is a delicious boy’s name with a classic down-to-earth, good-man sort of nickname, but I hate the idea that our child wouldn’t have a name of his very own.

I have read through endless name lists, pondered my favorite authors and protagonists, and made no progress. I don’t want to give this child a name that feels less perfect than his sister’s, but nothing feels like it carries the love and respect we put into her name. In short, nothing feels right.

Our hyphenated last name is two Scottish clans (3 syllables total), though actually the second half (my husband’s last name) was changed from the Polish by his great-grandfather.

We have one middle chosen, a three-syllable name starting with M that ties to nature.

Congratulations on your new baby on the way! And I’m sorry you’re feeling stuck. I do think naming is one of those parenting experiences that gets harder, not easier.

And yet, I think you’re on the right track. Because pretty much every name on your new (long) shortlist seems like at least a potential fit.

But let’s start with the name that doesn’t make the cut: Tyler.

Tyler might be Norah’s soccer coach. Even her teenage cousin. But he’s probably not her younger brother.

It peaked at #5 way back in 1994. As of last year, Tyler ranked #119. If it was, say, your beloved grandmother’s maiden name, or you’re a huge fan of Anne Tyler or Tyler Perry or maybe even Aerosmith, it’s different. But if Tyler just plain appealed to you a dozen years or more ago? No surprise that it’s faded over time, and here you are starting anew.

Bennett – In some ways, your daughter’s name mirrors your own: Sarah and Norah. So I wonder if you’d particularly like your son’s name to reflect his father’s? You don’t have to hand down Benjamin, but there are LOTS of great Ben names: Bennett would be my suggestion for you. But there’s also Benedict, Bentley, Ruben, Ben, Benson, Eben, and Benton. As a first or a second middle, it might be worth considering.

Calvin – Calder is one of my favorite underused names. I want to push you to move it to the top of your list! Alas, that’s not happening for you. And so would you consider Calvin? It’s in the same sort of vintage revival category as Norah, but also reminds me of Clyde and maybe Solomon, too. Cal has the same approachable, upbeat sound as Ben, so that feels like another bonus.

Jonah – Shiloh comes with a great meaning, but it’s relatively uncommon as a given name. Jonah seems like a more familiar name with a similar style. Plus, it also conveys a virtue. The name means dove, the symbol for peace. The ‘o’ of Jonah reminds me of Owen, too, and again, there’s a friendly nickname built it: Joe.

Miles – Miles reminds me of Moses, but without the possible nickname Mo. I suspect I’ve met a few brother/sister pairs named Norah and Miles. They just feel very right together. Another thought: Miles might come from the Slavic name element milu – gracious. But it also feels like a modern virtue name, suggesting a journey.

Peter – Robert and Henry are family names, and both sound like logical brother names for Norah. William is another rock solid classic. But I wonder if you’d like a boy’s name that reads classic, but isn’t quite so common? When I meet young boys named Peter, they tend to use the name in full. But Pete seems like an appealing nickname, too.

Samuel – I think Sam is the ultimate brother name for Ben. And yes, Ben Affleck has a son named Sam. But they’re far from the only family with this combination. If you love everything about Ben but don’t want a repeat, Samuel-called-Sam might be the way to go.

Silas – So, you love the outdoors. And many of your names feel a little more old school. Plus, there’s the lovely S sound of Solomon. Put it together, and I wonder what you might think of Silas, which means forest, ultimately from the Latin Silvanus, which comes from silva, the woods.

Theo, Theodore – I suspect you’ve already considered Theo and Theodore, but I’ll mention it here anyway. Just as you opted for Norah instead of Elinore, you might name your son Theo and skip the formal version. It represents a midway point between, say, William and Shiloh.

I’m having a tough time coming up with a favorite. Maybe that’s because the name I want to suggest is already on your list: Henry. It’s a classic choice. While nicknames exist, we tend to default to the name in full, so no awkward nickname problems. And it’s very much at home with Norah.

Could it be something like: Henry Bennett M- LastName? Or maybe Henry Calvin M- Last Name?

I’m curious to hear what others think, too! What would you name a brother for Norah? 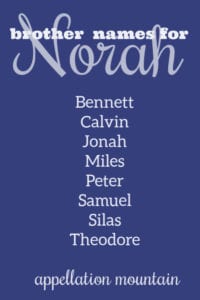