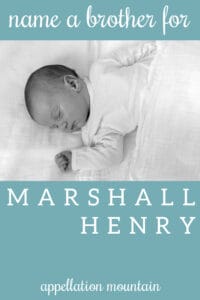 We have an almost three year old named Marshall Henry Lastname, and his baby brother is due in January. (But I was three weeks early with Marshall, so maybe we’ll have a Christmas baby!)

My husband suggested Marshall and at first I wasn’t sure. But I love it now. It sounds maybe a little bit tough, but still cuddly. People always know it, but we’ve never met another little Marshall. And he can grow up to be anything – ball player, businessman, electrician.

But nothing seems to really go with Marshall, if that makes sense.

My favorite from last time, Arlo, seems too short next to Marshall, and I don’t like the way there’s a MAR/AR sound.

This time around, my husband’s only suggestion is Grant, but when I Googled the names together, I found a musician named Marshall Grant. (Maybe that doesn’t matter?!)

We would like to use the middle name Frank or Francis for my grandpa. Franklin could be an option, too, maybe, but he was named Francis and mostly called Frank/Frankie.

Hit us with all the ideas, please!

There’s something about Marshall. I wouldn’t think to call it timeless, and yet it is. It’s ranked in the US Top 1000 every year since the list was established in 1880. It peaked around a hundred years ago, hovering around the #150 mark. Over the last twenty years, it’s typically ranked in the 300s, including #379 in 2021.

So I wonder if the right name for Marshall’s brother shares that profile – never too popular, never out of favor.

In that sense, Grant is a perfect match. It’s a strong name, one we think of as a first, even though it really started out as a last. And it’s bounced around the 100s to the 300s in the ranking – perpetually familiar, never overused.

While I immediately recognized “Marshall Grant” as a combination, I couldn’t name the exact person. (He was a long-time backing musician for Johnny Cash.) So I do think Grant could very much be on the table.

But let’s see if we can find some more possibilities.

A BROTHER FOR MARSHALL

Strictly speaking, Briggs is a trending name. The S ending makes it stylish. And it fits with lots of surname names like Brooks. But it’s not terribly common, and it has a rugged, strong sound.

Superman’s alter ego once sounded a little quiet. After all, nobody ever noticed Clark Kent, right? But these days, the distinctive sound feels like an alternative to Jack or Cole, and I think the slightly mid-century vibe matches Marshall well.

Garrett made it all the way into the Top 100 in the 1990s, but it never quite caught on. Instead it sounds a little Western. And, like Marshall, it’s appeared in the US Top 1000 every single year, so maybe it’s a quiet classic, too.

We tend to think of surname names as a new trend, but we’ve always used them – especially for our sons. And so Grady shares the same timeless quality as Marshall. It’s not exactly a style star, but neither is unfamiliar. Grady could be 3 or 53, an HVAC tech, a CEO, or CEO of the HVAC company.

If Heath hadn’t had a good run in the 1970s, bolstered by a television Western and the popularity of Keith, it would be a mega-hit now. After all, Heath is a nature name with a surname vibe, and there have been just enough notable Heaths to keep it in the spotlight across the decades.

Like Marshall, Otis is an unexpected choice. Originally a surname form of Otto, Otis has history to spare – and yet, it remains relatively uncommon.

Or Reid, which, at #299, is more popular in the US. Either way, it’s a strong sound, a name with several possible origins and meanings.

One more inspired by Reed … Reeve. It’s actually a surname derived from a Middle English job title. Back in the day, a reeve was the equivalent of a sheriff. Which makes it a subtle, but undeniable, match for Marshall. The sound is strong and distinctive, though I suppose Reeve is often misheard as the more common Reed.

I’ll admit that I’m kind of in love with Marshall and Reeve. But I’m not sure that’s quite what you’re after. And, realistically, if you had a third son, it potentially creates a pattern that would be impossible to continue. So I’ll vote for Briggs, though maybe it’s trendier than you would like, or possibly Heath, which feels like a perfect match with Marshall to my ear. And for middles: Briggs Franklin or Heath Francis.

Readers, what would you name a brother for Marshall?