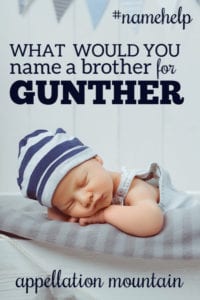 He’s here! Welcome to the world, Bruno. And thanks to Billie for the update. 🙂

We have a 3 year old named Gunther William and we are expecting our second boy in June! While we are so excited, coming up with a name for Baby Boy has been a challenge.

I love that you’re considering Sylvester. It’s a gutsy choice, the kind of name that parents overlook for no good reason. Like Gunther, we all recognize it as a given name. But no one is using it. It peaked way back at the beginning of the 1900s, and left the US Top 1000 entirely after the 1990s.

So it could be perfect.

And yet, Gunther isn’t just a rare name. It’s a bold, assertive name, too. Gunther is a medieval king, a force from legend and opera. I wonder if Sylvester feels a little more gentle?

Archer comes closer to Gunther in terms of strength, but it’s rocketed up the popularity charts. As of 2017, it’s just outside of the current Top 250. As for Sebastian, it’s ranked in the Top 100 since the year 2000. Fletcher falls in the 600s, but I wonder if it’s a preppier, more polished name, not necessarily a logical brother for Gunther?

Having shot down all of your ideas, I guess I’d better come up with some new ones.

Bruno – We tend to think of Bruno as Italian, but it’s roots are actually Germanic, and Saint Bruno of Cologne was born in the German city. Like Gunther, we recognize Bruno instantly. It feels easy to spell and pronounce. But it’s fairly uncommon, at least in the US.

Conrad – Conrad means “brave counsel” and it’s a name worn by German rulers and saints. An earlier generation might have tied Conrad to the musical Bye, Bye Birdie, but today, I think it feels vintage, vaguely German, and strong.

Emmerich – I’m tempted to suggest Emory or Emery, surname names related to this given name. But Emmerich is the more authentically German throwback, a rare name that would fit right in. I’m tempted to spell it Emmeric, because it ends with a -k sound, not a -ch. But maybe that looks incomplete? Another name along the same lines: Aidric.

Everard – Surname-name Everett is rising up the US popularity charts right now. Everard is the given name the led to Everett originally. It comes from Germanic roots, but made its way to English by way of the Normans. I think this one might be tougher to wear than some of the other choices on this list, if only because it’s so very rare.

Hadrian – There’s no German connection here. We know Hadrian as a Roman emperor in the second century. Still, I think it hits the same note as Gunther. One downside: we’d confuse it for the much more popular Adrian, at least some of the time.

Magnus – One of my first thoughts. Magnus comes from the same roots as Maximus, by way of Scandinavia. It’s a grand name with a meaning to match: great. I like that Gunther and Magnus are both northern European names with a lot of backbone, easily recognized, but seldom heard.

Nicanor – This one’s Greek; Nicanor comes from the word for victory – nike. While it was used in the ancient world, it’s quite rare today. Ernest Hemingway named his firstborn John Hadley Nicanor, which is where I first heard it. It’s rare, but probably just on the right side of wearable.

Ramsay, Ramsey – Another surname-name, Ramsey comes from Old English. Ramsay is an equally valid spelling, used in Game of Thrones. While it has nothing to do with rams, I think that sound lends it some power.

Thorsten – Thorsten means Thor’s stone; along with Torsten, it’s heard in Scandinavia, but also in German-speaking countries. It’s nickname-proof, like Gunther, and I like the subtle shared ‘th’ sound between the two names.

Now I’m wondering if I’ve gone too far towards the rarities? My favorite remains Magnus. Gunther and Magnus sound just like brothers to me. I like Bruno an awful lot, too, and if the rare names don’t scare you, I think Nicnaor has potential.

I do want to add this: it’s possible that you’re not settling on Sylvester/Archer/Fletcher/Sebastian because of the slight style difference I mentioned earlier. But it’s equally possible that your style has changed and evolved. So you’re not obligated to match Gunther exactly. They’re human beings, not pieces of living room furniture. So if all of my suggestions fall flat? That might be a good signal to go back to your original list and embrace one of those names for Gunther’s new brother.

Congratulations, and please let us know what you choose!

Readers, over to you! What would you name a brother for Gunther?