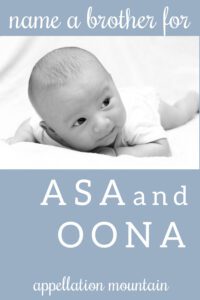 I’ve been reading and enjoying Appellation Mountain since I was pregnant with my first, more than eight years ago. Now, here I am again, as we stare down the challenge of naming our third and (almost certainly) final child.

We have a son, Asa, and a daughter, Oona, and are expecting our third — a boy — in a few months.

We’re drawn to slightly uncommon but not unheard of names. We chose both names simply because we loved the name, and because once the baby was born, they felt right; neither has family significance.

The names share some obvious similarities, but haven’t felt too close for my taste; that said, I’m aware that if we add a third to the mix that repeats the short, vowel heavy pattern, it might be a bit… much.

I love the sound of both names, and I like that they resist nicknames, though that’s not a requirement for our third.

We’d been on the fence as to whether or not we’d have two or three children, and when we chose Oona’s name, we didn’t think much about what it might mean for the third. (I’ve always thought that as a set, “Asa and Oona” sound like a spunky sibling duo in a children’s novel — but now they need a third buddy to join the team!)

I want something that fits with the first two, but doesn’t push us into the realm of the absurd or comical. We’re not opposed to going slightly more popular or conventional with this name.

Help us out! What would you name a brother for Asa and Oona?

Congratulations on your third! And – oh – how I love the way you’ve described Asa and Oona: a spunky sibling duo in a children’s novel.

I appreciate that you’re open to more conventional names, because I do think the way to best complement Asa and Oona might be to skew a little more familiar, but still vowel-heavy.

Of course, you could lean into the style hard. Asa, Oona, and Esau, maybe? But I think that’s likely to be a tongue-twisting recipe for confusion.

So let’s see if we can find a bold, adventurous name that shares some of the best qualities of your older kids’ great names … but also strikes out on a path all its own.

Maybe I should stop pushing Bram? It never really catches on. Originally short for Abraham, most Americans only think Stoker – or mishear it as Bran, and think Game of Thrones. I like it with Asa and Oona because the sound is sharp and different, a punctuation mark at the end of the sentence.

In many ways, Crew sounds like Bram when said in a series: Asa, Oona, Crew. Except Crew’s strong vowel ending might edge it a little closer to the vowel-heavy sounds of your older kids’ names. Crew is trending, rising quickly in use. (Home design mavens Chip and Joanna Gaines named their youngest Crew, which helped spotlight this already-stylish choice.) And yet, Crew sounds like he’d be climbing the same trees as Asa and Oona.

Dash started out – at least sometimes – as a short form of Dashiell, a surname name with French roots, worn by twentieth century American author Dashiell Hammett. But Dash is more popular on its own. No question it feels daring and bold, but still accessible.

One of the first names that came to mind! Not only is Elliott a Top 200 name, but so is Elliot – just one T – at #164. Eli ranks in the current Top 100, as do Elijah and Elias. So it might feel far more popular than Asa or Oona. And yet, it’s a vowel-forward name that sounds perfect when said in a set.

Opting for a boy’s name ending with O rather than A seems like an obvious strategy. Asa and Hugo feel very compatible – great meanings, similar popularity levels, easy to spell and pronounce, unlikely to be shortened. But is Hugo too close to Oona? My instinct is no, but it’s worth saying them together five times fast to make sure you agree.

The funny thing about Ian is that it ranks in the Top 100 … but it never feels that popular. Julian is even more popular; Caspian, quite a bit less, but trending. I love the way Ian has a different vowel sound, but is still all vowels – a perfect brother name for Asa and Oona.

The same question applies here – is another O name too much? Otis has that quirky, throwback vibe – it’s the kind of name that belongs to a kid in a book, the one skipping stones in the creek.

Reese (and Rhys and even Reece) had a good run, and it remains popular for girls. But how ’bout Reeve? Actor Reeve Carney graduated from Penny Dreadful to House of Gucci. It’s a sharp name, with a strong vowel sound that stands up nicely to Asa and Oona.

Yates could fit right in with so many s-ending boy names – think Brooks and Miles and Wells. This one is rare and unexpected – just like Asa and Oona. But it’s easily spelled and pronounced, which makes an unusual name far easier to wear.

Zeke just sounds like an adventurer. A bush pilot, maybe, or the guy who leads the kayaking tour. It’s also appeal to bookend your children’s names with the initials A and Z. Unless, of course, you find that a little too obvious.

I like so many of these I can’t pick just one! I really like Elliott, particularly because you might end up with Asa, Oona, and Eli. Yes, it’s a more common name. But it’s a great choice, too!

But I keep coming back to Zeke. It’s a sharp, strong, distinctive name that feels intentionally different from Asa and Oona without being a mismatch.

Of course, if this exercise makes you realize you don’t want to break the pattern much, then I’d change my vote to Hugo.

Readers, what would you suggest as a brother for Asa and Oona?