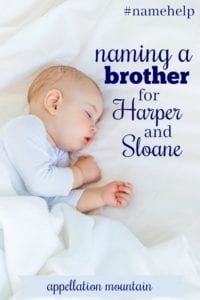 Why is it so hard to name a boy?

We have twin daughters named Harper Julia and Sloane Amanda. The middle names come from dear friends who are the girls’ godmothers. The first names are names we loved. I wish Harper wasn’t so popular now, but the girls are going into first grade, and we don’t really meet that many Harpers.

Our third – and last – child is due in a few weeks. For some reason, I thought it would be a girl again, so I was thinking about names like Lennon, Laine/Delaney, Quinn, Marlowe, and Whitaker.

But it’s a boy! My husband keeps coming back to names like William and James, which I can’t see on my son. Or maybe Dylan, Logan, or Brennan, and I do like those – but better for a girl.

I’m not sure if I should choose a name that we both like, even if we might have considered it for a daughter? Or if there’s something we’re just not thinking of?

I think you’ve stumbled into one of those baby naming dilemmas. Using unisex-style names for daughters can make it a little more confusing to name a son.

And yet, I think you have a path forward, because unisex names aren’t often truly unisex.

Stay with me for a minute here.

In order for a name to be truly unisex, it has to be used in even numbers for boys and girls alike. In the US, very few names fit that description. Most of them are used more heavily for boys or girls. Your daughters’ names, Harper and Sloane, are both used almost exclusively for girls.

So one possible approach? Choose a surname-style name that trends masculine. Your kids’ names will go together nicely, but others will (mostly) guess correctly that Harper and Sloane are girls, and your son is a boy.

To be clear, I don’t think a little bit of confusion is the end of the world. More and more names do feel truly unisex these days, and my own kids’ experience suggests that it’s not nearly as burdensome as some perceive. We’ve known boy and girl Jordans and Averys. The kids seem to shrug it off.

Still, I think you might feel more confident if you chose a name like Dylan, Logan, or Brennan, but maybe one that sounds more clearly masculine to you. And, happily, there are plenty of options that aren’t used in big numbers – if at all – for girls.

Callahan – So often, it’s the potential nickname that determines if we perceive a name as feminine or masculine. Emerson shortens to Emmie, so we hear girl. But Callahan? It becomes cool Cal.

Hendrix – Maybe it’s because Hendrix is so close to traditional Henry, or perhaps it’s because we all think of world-changing Jimi when we hear it, but Hendrix feels perfect for a son.

Paxton – Pax was, indeed, a goddess. In ancient Rome, she personified peace. But thanks to Max and Jax – plus Angelina Jolie and Brad Pitt’s son – we hear Pax as masculine today. Paxton actually comes from an unrelated Old English name. Again, this one is all-boy.

Reid – I love the clean, strong sound of Reid. The ‘ei’ spelling is slightly more popular than Reed, but both feel like logical choices for a brother to Harper and Sloane.

Thatcher – You could consider Hunter or Carter, but if you’re after something less common, would you consider Thatcher?

Walker – Along the same lines, Walker is one of those -r ending names that might work nicely. Though now I’m wondering if two -r ending names is too much in one family? I don’t think so, but I’m also going to suggest …

Walton – This might be my favorite with Harper and Sloane! The Walt part makes it feel masculine – though, interestingly, it doesn’t really come from Walter. All three names have different first initials, different ending sounds – and yet a cohesive style.

If not Walton, I’m most drawn to Reid.

Can one of those more classic firsts be moved to the middle spot? Reid William, maybe, or Walton James? I think that could make for a great compromise between his favorites and yours.

Readers, I’m wondering if any of you have wrestled with this challenge? What would you name a brother for Harper and Sloane?