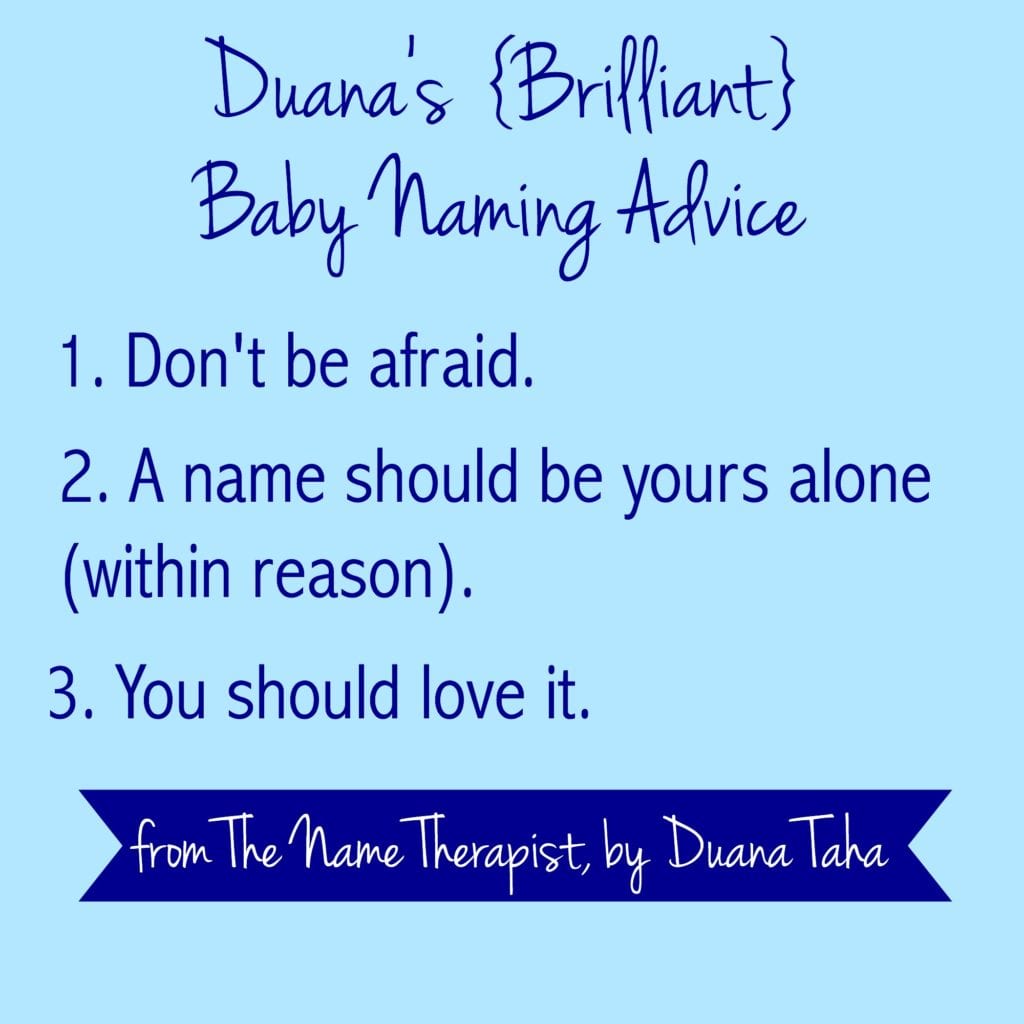 If you love names – or if you’re just fascinated by pop culture – Duana Taha’s The Name Therapist is a must read.

Duana comes by her name obsession honestly, though her story is very much the opposite of mine. I disliked having a common given name; she was frustrated – that might not be a strong enough word! – by never finding her very unusual Irish name on personalized pencils.

While Duana insists that this is not a baby name book, she does have a very specific point of view, and some advice that will be helpful for parents looking for encouragement to use a bolder, less common name for their child. Her first piece of advice is don’t be afraid – so simple, so difficult, and so important – though she also notes that there are “people who are interested in unusual names for other people, but happiest when their choice is unassailable.” While she doesn’t say it expressly, the conclusion is clear: better to consider the surprising names, than to rule them out immediately. 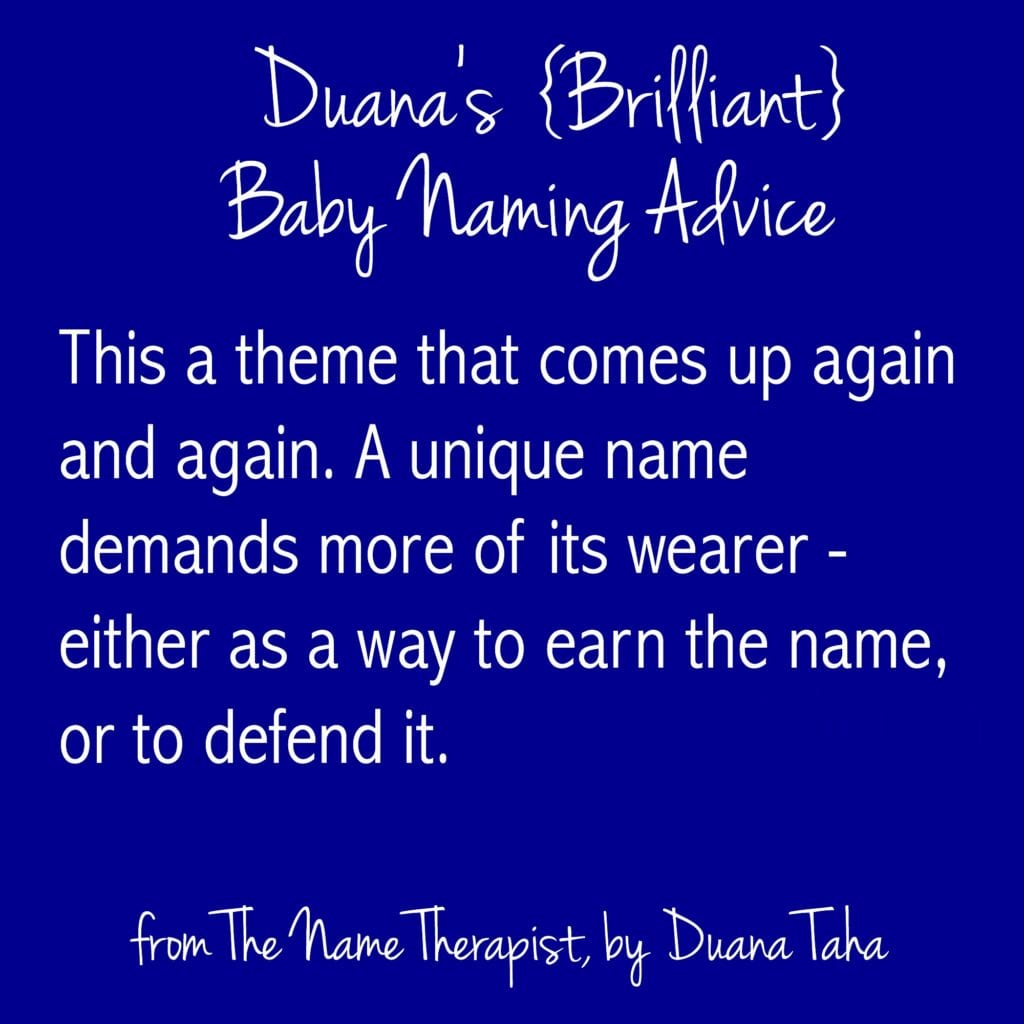 One of my favorite parts of The Name Therapist is Duana’s reflection on what it’s like to have an unusual name. She seeks out others with equally distinctive names, and concludes “There is a theme that comes up over and over again. A unique name demands more of its wearer – either as a way to earn the name, or to defend it.” There’s a conversation with a Rachel who might have been named Memphis instead, and she wonders if the course of her life would have been different with a very different name.

Maybe that touched a nerve for me because it’s part of my personal story. My mother had a Very Unusual Name – an Italian family name that she disliked. But my mother is an introvert, and me? In another life, I might have been a game show host. She played it safe with my name, and I disliked fitting in as much as she disliked standing out. (Duana interviewed me for her book, and my story is in this section!)

If some of this sounds fluffy or frivolous, know that nothing is further from the truth. The book is so readable – and so very fun for the name-obsessed! – that it’s easy to miss how weighty these conversations can be. Identity isn’t easy.

That’s especially true when she dives into the most sensitive subject in the book. Once again, Duana’s personal experience allows her to handle a complex subject with grace: multiculturalism and naming. 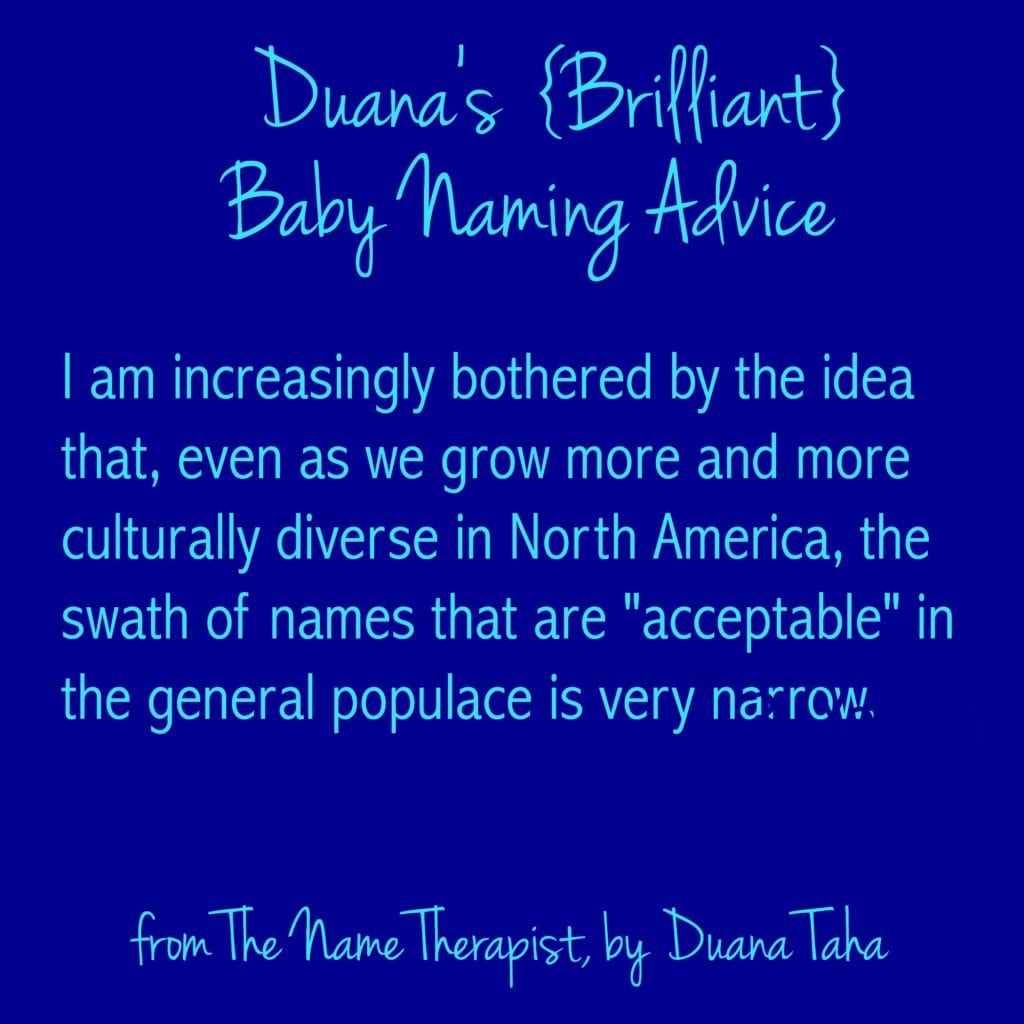 Duana’s parents are immigrants to Canada, her father from Egypt and her mother from Ireland. She argues that we should freely embrace names from other cultures.

I struggle with this question.

So many families are not exclusively  of European descent. Or maybe they are, but their Europe is Croatia and Estonia, not England or Germany.

We don’t blink if a mom from Honduras marries an American guy whose roots are mostly Scottish and they decide to name their daughter Emma. Or if they emphasized their Scottish roots with a name like Ailsa. But what if they opt for names more traditional in Latin America? Maybe something like Iveth or Yareli? I suspect that some might dismiss Iveth and Yareli, even as they embrace Ailsa. Or that the parents might decide that Emma was the safest choice, even if it wasn’t one that they truly loved.

In this sense, I think her advice is powerful. If we’re going to encourage the use of a deeper pool of baby names, it means moving beyond mostly Western Europe, to embrace Svetlana and Kiran and Jelani and Eskandar.

But if I name my white daughter of European descent Priya, am I celebrating another culture?  Or engaging in cultural appropriation, removing a name from its original context and using it only because I find it pretty?

Duana’s perspective gives me hope that there’s a way to add to the name pool that is a celebration.

There’s so much more to consider from Duana’s work, and I’ll share more of my favorite parts  – and a few places where she and I disagree – over the next few weeks. But for now, if you’re after something addictive and thought-provoking, The Name Therapist is a choice that will not disappoint.

Note: I received a copy of this book for review. All opinions are my own.