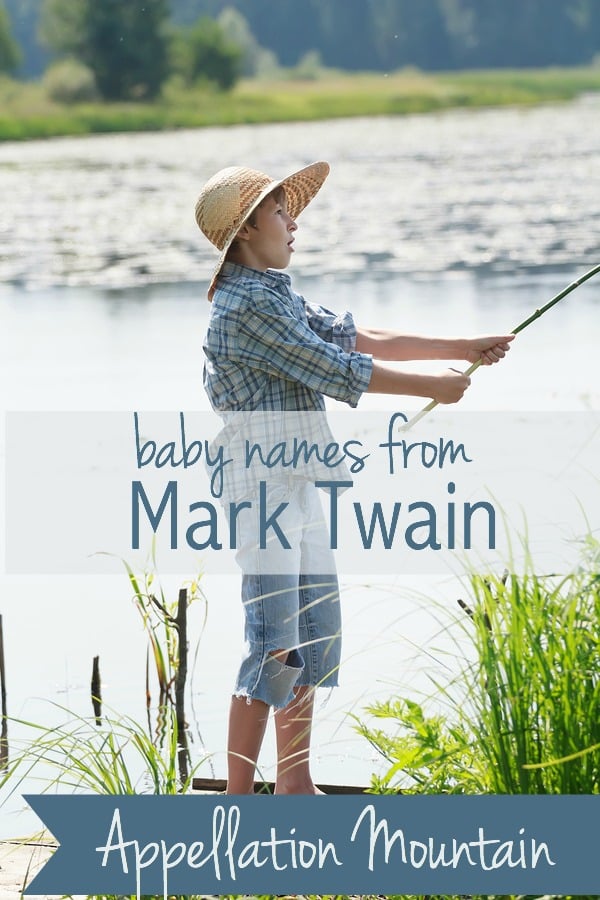 Literary baby names are big. Long-time favorite Emma owes quite a bit to Jane Austen, and Harper is all about To Kill a Mockingbird. But for boys, perhaps the biggest literary influencer of the moment is American novelist Mark Twain.

Twain’s characters, Huck Finn and Tom Sawyer, have helped fuel two of the most popular names for boys of recent years. Could there be other Mark Twain baby names to consider?

Read on for some of my favorite finds from the author’s short stories and novels.

Alice, Helen, and Agnes – In one of the author’s last short stories, My Platonic Sweetheart, three different versions of the same woman answered to three different names. I think they’re all fabulous! Alice is a sweetly vintage name with literary ties of its own. Ancient, mythological Helen is quietly making a comeback. Only Agnes remains in style limbo, but I’m convinced we’ll be hearing more of this name soon, too.

Alisande – I’m not sure where Twain found the name Alisande, but it’s the full name of Hank Morgan’s love interest in A Connecticut Yankee in King Arthur’s Court. Hank calls her Sandy. The names Sandy and Alison are used elsewhere in Twain’s works. Veteran actor Orson Bean voiced Hank in a 1970 made-for-television animated version of the story, as part of the Classic Tales series on CBS. Between 1970 and 1974, about three dozen girls were given the name. It’s likely that’s due to the CBS show.

Joan – Joan of Arc is a historical figures, but it’s also among the Mark Twain baby names, because the author’s last completed novel was based on the saint’s life.

Polly – Tom’s strict, but loving, aunt. Molly entered the US Top 100 in 1987, and spent over twenty years there. But Polly remains rare.

Roxy – The Tragedy of Pudd’nhead Wilson is about the life of two boys, switched at birth. Chambers is the son of Roxy, both born into slavery. Tom is the infant, the same age as Chambers, in Roxy’s care. Tom is wealthy, but neglected by his father. Chambers is loved, but his mother fears for his life. Roxy – short for Roxana – decides to switch the two boys.

Arthur – Twain is one of many writers to borrow King Arthur for his stories, but the name Arthur also appears in one of his short stories.

Elias – In Captain Stormfield’s Visit to Heaven, the captain’s given name is Elias.

Finn – Finn is appealing for half a dozen reasons – Irish legend, ties to the ocean, the handsome football player turned singer on Glee. But surely Huck Finn is an important one, an innocent vagabond, the son of the town drunkard in The Adventures of Tom Sawyer who goes on to help Jim flee slavery in The Adventures of Huckleberry Finn. Huck Finn narrates two additional novels, both focused on his friendship with Tom. Finn currently ranks #234 in the US, and is climbing.

Huck – If Finn is popular, Huck remains rare. A handful of celebrities have embraced the name. Adventurer and television host Bear Grylls gave the name to his youngest son, while Brad Paisley has a William Huckleberry, called Huck. I’ve also heard Huck used as a nickname for Henry, and even suggested for Charles. There are plenty of theories about why Twain chose the name, but my favorite is this: huckleberries have a reputation for being difficult to cultivate. (The scientific explanation seems to be that their root systems are not centralized, so it’s tough to transplant a wild huckleberry bush. I’ve never tried, but doesn’t that track with the character’s nature?)

Leonidas – It’s almost unfair to put this name on the list, because Leonidas is only mentioned briefly in The Celebrated Jumping Frog of Calaveras County. And yet, with Leonidas feeling so tragic and heroic and war-like after The 300, it’s nice to have a different take on the name.

Silas – Silas appears in at least two of Mark Twain’s works: The Gilded Age: A Tale of Today, which he co-authored with Charles Dudley Warner in 1873, and a character in Huckleberry Finn. It’s not like we really need another excuse to use the stylish Silas, but it doesn’t hurt!

Simon – Another name from The Celebrated Jumping Frog of Calaveras County, though that’s certainly not the first reference that comes to mind for most. (For the record, I think of the singing chipmunk, the lead singer of Duran Duran, and a few real life Simons before I would ever get to this reference.) Still, I think Simon is a great name, and a solid alternative to the most popular of the classic names for boys.

Thatcher – If there’s a new Sawyer waiting in the wings, it might be Thatcher, the surname of Tom’s crush, Becky. Only Thatcher feels less like a nostalgic Americana literary pick, and more of a nod to Great Britain in the 1980s, thanks to former Prime Minister Margaret Thatcher. Still, I think enough time has passed that Thatcher feels perfectly wearable – especially in our age of Carter, Hunter, and especially Sawyer.

Did I miss any of your favorite Mark Twain baby names? If you love Finn or Sawyer or Polly, is it because of these characters?