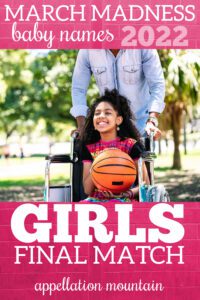 How can we already be at the final round of girls’ March Madness Baby Names?

This contest starts with the sixteen most popular posts on girls’ names from the prior calendar year. (Past champions of March Madness Baby Names cannot compete. Check out the full list here.)

The most popular names list at Appellation Mountain tends to be quirky + specific. Why? Maybe because a featured name here gets an in-depth treatment usually reserved for Top 100 names and style stars on a more typical site.

Or maybe it’s just because AM readers can be champs at spotting trends. Many March Madness winners aren’t in the Top 1000 at all … until a few years after they surge in our annual tournament.

Whatever the reasons, these sixteen names rose to the top in 2022:

Your votes narrowed the field to just four names! Let’s take a look at the girls’ semifinals:

With a commanding 70% plus of the vote, Vera knocked out Marlowe. Given the success of Harlow and Willow and Madison, Marlowe has always felt like a natural to me, the kind of name meant to storm the popularity charts. But it hasn’t quite happened, and AM readers seem to share the general hesitation over this modern-meets-midcentury choice. Of course, that makes it a solid under-the-radar choice for parents after something just slightly different, too.

Vera, though, is a name going places. It’s the kind of choice everyone recognizes. But since it was last wildly popular from the 1890s to the 1910s, it’s had a nice, long hibernation. Oscar-nominated actor Vera Farmiga brought it to parents’ attention in recent years, too. No surprise it’s a powerhouse in this competition.

In a closer contest, Marigold managed to slip past Alessandra with about 64% of the total. Flowing, romantic Alessandra – the Italian take on Alexandra – has been a little bit of a surprise. It’s more popular now than in decades past, but it’s actually fallen a bit over the last five years. Still, because Alessandra never quite caught on, it’s a good alternative to favorites like Isabella and Sienna.

But Alessandra finally fell to flower power pick Marigold. Ever since Downton Abbey put the name in the spotlight, it’s seemed like a real up-and-comer. Great nicknames, similar to Margaret and Violet, it’s the sort of name that feels like it’s always been around, even if you’ve never heard it on an actual person before.

And that means our final match is …

Polls stay open until March 30th. Check back on March 31st to see which name wins!