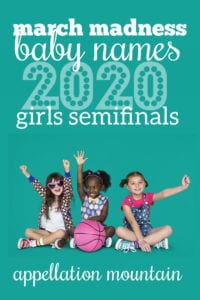 We started with sixteen names, all chosen from the most popular posts at Appellation Mountain in calendar year 2019. The opening round cut that list in half, and the quarter finals eliminated four more contenders.

The winning name will join past champions:

But before we can get to this week’s contest, it’s time to review last week’s match-ups.

I can imagine any of these four fitting right in with past March Madness baby name winners. But the outcome is up to you!

Voting will remain open through Thursday, March 26th. Check back on Saturday, March 28th to see which names advance. And, of course, to vote in the final round and choose this year’s winner!