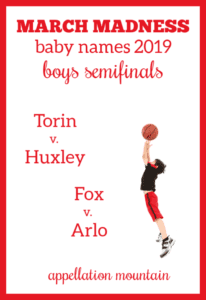 Time for the Boys SemiFinals round in March Madness Baby Names 2019!

But first, a look back at the exciting competition from the QuarterFinals:

And so we say good-bye to some of our favorites, and move on to the SemiFinal round. Any of these four names could take home the crown – though I already have my thoughts on which name will win it all.

I don’t think I’d even heard of Torin or Huxley – at least not as given names – until a few years ago. But they’re both new favorites. Torin sits just outside of the current Top 1000, and Huxley is racing up the charts. But only can advance in March Madness Baby Names 2019, and it’s your vote that will choose!

While Arlo claims a little bit of history, it wasn’t much heard until recent years. Likewise, Fox counts as a twenty-first century favorite. The two names could appeal to the same parents – brief, complete, and with very modern sounds. Which one will move on to compete in the final round? That’s up to you …

Polls will remain open until Thursday, March 21st. Come back on Saturday, March 23rd to see which names advance to the final round – and, of course, to vote for the big winner!