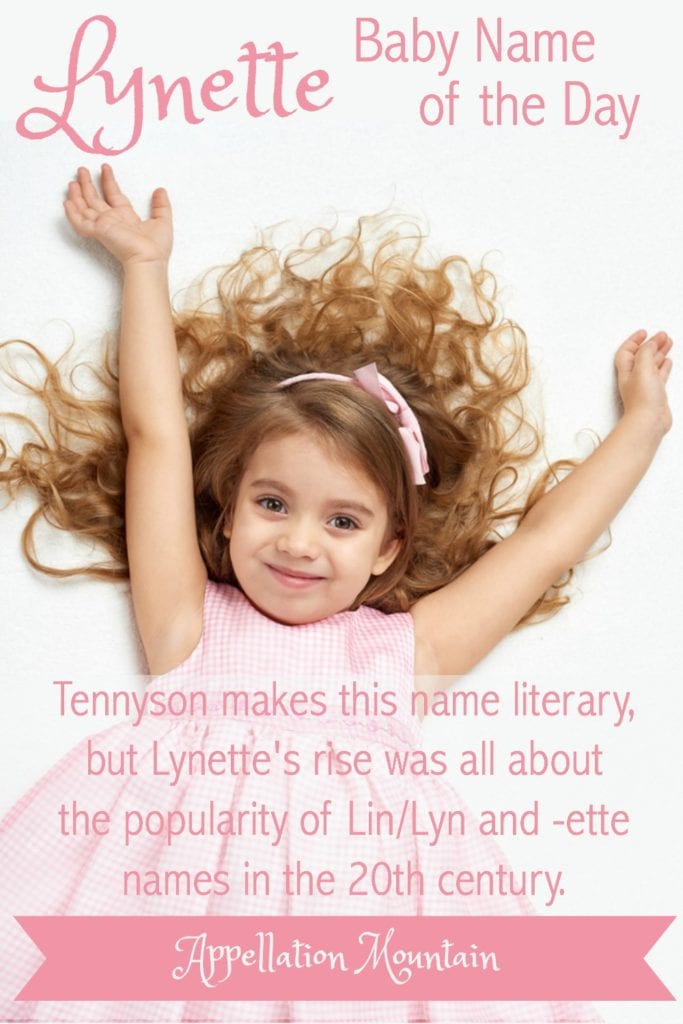 Thanks to Rosa for suggesting our Baby Name of the Day.

Let’s start with the literary part of our tale.

Alfred Lord Tennyson penned Gareth and Lynette in 1872 as part of his nineteenth century Idylls of the King, about King Arthur.

Tennyson took the name from an older collection of Arthurian legend, the Welsh Mabinogion.

The character’s name evolved over the centuries. It started out as Luned or Eluned. In Welsh, eilun means image; a fifth century Welsh Saint Eluned fled a forced marriage and became a local hero.

Lynette started to rise in the 1940s. Maybe some credit goes to Camelot, but I doubt it.

Instead, we need to look at Lynn.

In Welsh, llyn means lake. It became Lynn, a surname and then masculine given name. Eventually, we started to perceive Lynn as feminine, thanks to names from Madeline to Marilyn to Linda.

Take a look at the numbers:

And then came Jeanette and Annette.

Jeanette and Annette originate in France, nickname forms of Jeanne and Anne. Plenty of French diminutives end with -ette, like Josette, Claudette, and Mariette.

Except not really Lynette. You’ll find a few in the French data at Meilleurs Prenoms, but it does not appear to be traditionally used.

We see the first hints of Lynette’s potential in this era.

Annette caught on in the 1950s, when Annette Funicello became a household name. Funicello graduated from The Mickey Mouse Club in the 1950s to star of a series of 1960s beach party movies.

Lynette peaked in the same era that saw Annette rank in the Top 100, though it was never quite as popular. Lynnette also fared well in the late 1950s and 1960s.

The -ette trend was running its course.

Desperate Housewives dominated the ratings for eight seasons, from 2004 to 2012. The show’s success boosted names like Bree and Felicity, but it couldn’t do much for Lynette.

Today, the name is out of fashion. Parents embrace other -et girls, like Juliet and Juliette, Scarlet and Violet. And -lyn ending names, like Madelyn and Adilyn, have made a comeback.

Despite a serious literary pedigree, the sound seems not quite on trend for 2016. And yet, given the long history of use, all of the underused -ette names will be back – just give them time.

Do you think this name is ready for a comeback?