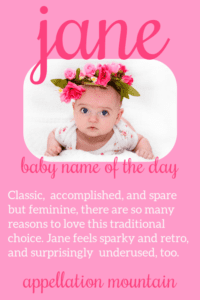 Few names feel as classic as long-time #1 pick John. It remains broadly influential, even though it vacated the top spot long ago.

We whispered John into dozens upon dozens of international forms. (Evan, Ivan, and Giovanni; Jussi, Juan, and Hannes to name just a few.) Add in nicknames and surnames – Jackson and John – and other twists, like Jonathan and John Paul – and the list grows longer still.

Feminine forms abound, too, and it can be tough to draw the line. Does Janessa count? I’ll say no. But that still leaves Jana, Janelle, Joanna, Johanna, Giovanna, Giavanna, Gianna, Giana, Ivanna, and, of course, Jane in the Top 1000.

A Pair of Queens

There’s also Joan, of course, long the go-to feminine form of John. Saint Joan of Arc was actually Jeanne d’Arc – or Jehanne – in France during her lifetime.

The English feminine names descended from Johannes, via Jehanne.

The sixteenth century gave us two ill-fated queens by the name.

First came Jane Seymour. She married King Henry VIII in 1536, becoming his third wife. As queen, she gave him the son he so desperately wanted – but would die of complications following childbirth.

Fast-forward to 1554, when King Edward VI – Jane Seymour’s son – passed away. Religion divided the nation, and so a Protestant successor – Lady Jane Grey – was named instead. Intelligent and highly educated, and just seventeen years old, she reigned as queen for just nine days, and eventually went to her death for treason.

Despite these inauspicious namesakes, Jane eclipsed Joan over the next century or so.

Literary powerhouse Jane Austen was born in 1775. She shared her own name for characters in both Pride and Prejudice and Emma. If that wasn’t enough to make this name feel to the library born, there’s the heroine of Charlotte Bronte’s enduring novel, Jane Eyre.

It’s plain that this name defies any attempt to pigeon-hole it. Fashionable and literary, royal and religious, quiet and bold, this name shape-shifts. It makes a strong choice, one that’s as no-nonsense as Kate, as accomplished as Eleanor. It’s an impeccable classic, and yet Janie is right at home with sassy, retro picks like Sadie and Frankie.

That might make this the perfect stands-out, fits-in name, a sister for Claire, an alternative to Grace.

What do you think of Jane? 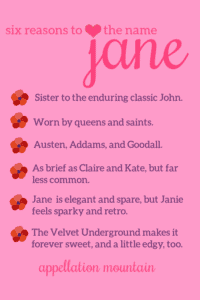