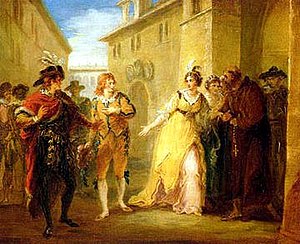 She’s a Shakespearean place name with a romantic sound and a sci fi twist.

Thanks to Felecia for suggesting Illyria as our Baby Name of the Day.

Illyria is the setting for Shakespeare’s Twelfth Night, and the Bard borrowed it from the map.

In real life, it was once the name for the western part of the Balkan peninsula, a part of the world with a reputation as being contentious and war-torn, but also incredibly beautiful.

The Romans are responsible for the name.  The founding myth for the region goes like this: Illyrius, the son of Cadmus, was born while his father was on campaign in the Illyrian Wars.  Years later, he would rule the kingdom, and his descendants would become the first Illyrians, and thus, all of the peoples in the Balkans.  Here’s guessing it is mostly a myth.

The area was a Roman province known as Illyricum.  The Romans were on hand for practical reasons.  Piracy in Adriatic was wreaking havoc with trade.  A capable queen called Teuta was responsible for organizing the resistance to the invaders.  It would take three separate invasions over four decades before the Romans could call Illyria theirs, and another century of uprisings and revolts would follow.

The name remained in use even after the province dissolved, found in records into the 1400s.

Illyria has been revived over the years by various invaders and would-be Balkan rulers.  Napoleon gave the name to the part of the peninsula he incorporated into his empire.  In the nineteenth century, the Austrian Empire briefly included the Kingdom of Illyria.

Shakespeare borrowed the name back around the year 1600, and Twelfth Night lends Illyria a literary, romantic quality.  The illustration above depicts a scene from the play.

While Shakespeare never traveled, some have speculated that his Illyria was based on the city that we now call Dubrovnik, Croatia.  I found more than one abridged version of the story that used Dubrovnik rather than Illyria.

Other writers have borrowed the name or the place:

There’s also Ilaria, a similar-sounding name from a different source.  Ilaria is the Italian feminine form of Hilarius.  It’s the source of the name Hilary, and literally means cheerful.  Actress Nia Vardalos gave the name to her daughter a few years ago.

But back to the original name.  If you watched vampire-detective show Angel, you might recall that Amy Acker played a brainy researcher called Fred.  Remember the final season?  Sweet, whip-smart Fred was investigating a mysterious sarcophagus when she became seriously ill.  Turned out that Fred was infected with the essence of an ancient goddess, and was soon to be reborn as an “Old One” called Illyria.

It’s a wacky sci fi twist to the name, but it probably did suggest Illyria as a possibility to at least a few parents.  In 2004 – the year the character was introduced – six girls received the name, Illyria’s highest showing.

She’s been used by a handful of parents every year since.  And why not?  With literary and geographic ties, Illyria can offer a substitute for the wildly popular Isabella, or many other -ia ending names, like Amelia.

Overall, Illyria is an unconventional choice rich with potential.