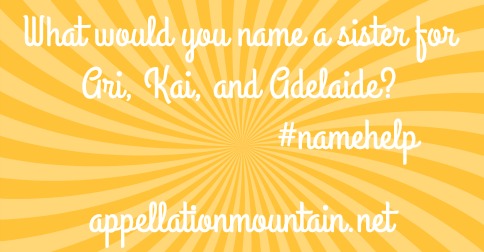 We are having our fourth child in April, a girl, and feel lost in finding a name that works.  Our older children are Ari Adrian, Kai Owen, and Adelaide Soleil.

We don’t have any kind of list yet. My loose requirements are that it not be a popular name or nickname. I’m not so crazy about girls’ names that end in ‘a’. I thought it might be fun to have a name that starts with Z, but there don’t seem to be too many good choices.

Any help would be greatly appreciated!

Please read on for my response, and add your thoughtful comments in the suggestions. 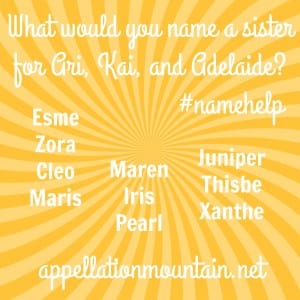 Here’s what jumps out at me: your sons’ names are brief and bold. Ari and Kai feel modern, though they’ve both got meaning and roots. Adelaide has every bit as much spirit, but it’s a longer name, and feels more traditional.

We’re looking for a name that hits the middle ground, a fresh name for a girl that’s not so novel. That rules out a few names that work well with Ari and Kai, like Zoe or Lux. (Though I’m guessing Zoe is too popular for your tastes!)

Esme – JD Salinger made this name literary. It was an off-the-radar choice for years, used in small numbers by stylish parents. Esme has recently entered the US Top 1000, but it’s still uncommon – fewer than 350 girls were named Esme in 2014. Ari, Kai, Adelaide, and Esme – I think Esme fits in beautifully.

Zora – I suspect you’ve already ruled out Zora, since it’s an ends-in-a name for a girl. But I’m mentioning it anyway, because it has that same literary, new-old quality as Esme. And the idea of a Z name seems so appealing.

Cleo – Full disclosure: my daughter’s name is Clio! But I do think Cleo is one of those names that feels modern and daring, but actually has history galore. It’s ends-in-o, rather than a, but wouldn’t be mistaken for a boy’s name.

Juniper – Since Adelaide’s middle name is Soleil, I’m guessing that nature names are fair game. Juniper is a longer name, just like Adelaide. It feels upbeat and lively, and I think it completes your quartet nicely.

Maren – Maren and Maris are two of my favorite rare, tailored names for girls. They have multiple possible origins, but at least one is a connection to the ocean, via the Latin mare – sea.

Iris – Iris is currently in the US Top 300, and it’s usually ranked around that mark. It feels stylish in 2016, but it’s still not nearly as popular as Lily. Iris is nickname-proof, feminine without the traditional ‘a’ ending, and feels like a sister for Ari, Kai, and Adelaide.

Pearl – While we’re talking nature-inspired names, I wonder what you’d think of Pearl? It feels more traditional, like Adelaide, but is short – like Kai and Ari. It might be too vintage for your tastes, but it’s a great example of a not-too-common choice that still feels familiar. Pearl was out of the US Top 1000 for years, and only recently returned.

Thisbe – Or maybe you’d like something completely different? Thisbe is a Greek name, just like the oh-so-popular Zoe, Chloe, and Penelope. It’s from a romance in Ovid’s Metamorphoses. It’s never cracked the US Top 1000 – and I doubt it will anytime soon. Another name along these lines: Xanthe, which gets you the Z sound, if not the letter.

Now it’s your turn! Readers, can you suggest some names to go with Ari, Kai, and Adelaide? Do any of my suggestions seem like good fits to you?