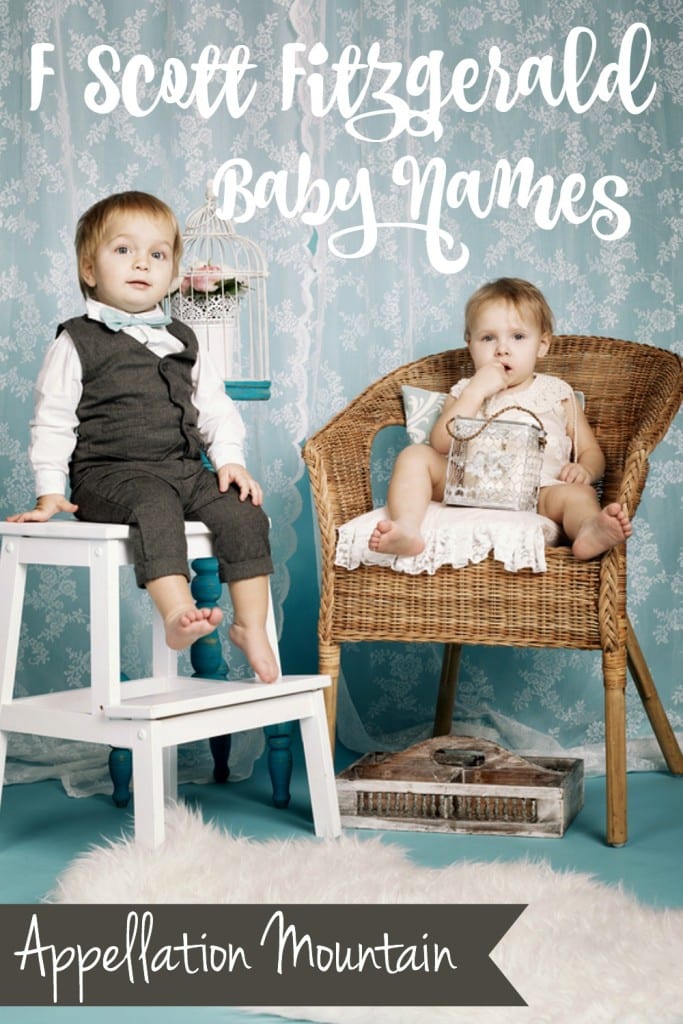 F Scott Fitzgerald baby names are borrowed from the author’s novels and short stories, and there are more than you might think. They’re just right for the Jazz Age, a mix of privileged and preppy choices, along with with some unexpected gems.

Ready for a surprise? A great many of the F Scott Fitzgerald baby names feel fresh and interning in 2016. Maybe that’s because enough time has passed. Or maybe it’s because Fitzgerald was just a great namer.

After all, he must have known something about having a stand-out kind of name. Fitzgerald’s full name was Francis Scott Key Fitzgerald, named for his famous cousin, author of “The Star-Spangled Banner.”

Fitzgerald mostly answered to Scott, a name that would have been fairly uncommon when he was born in 1896, but would become a Top 20 favorite in the 1960s and 70s.

His wife, Zelda, has the kind of early twentieth century name that feels pitch perfect in 2016. She was named after two literary characters in late nineteenth century stories that are mostly forgotten today.

Fitzgerald’s The Great Gatsby was first published on April 10, 1925 – making this the book’s 91st anniversary.

So let’s take a look at some of the most intriguing, literary F Scott Fitzgerald baby names that might wear well for a child today.

Ardita – I’ve never read The Offshore Pirate, Fitzgerald’s tale about a young woman who falls in love with a pirate on a visit to Florida. Ardita doesn’t feel quite on trend today, but I’m fascinated by this rarity. It’s basically unused. Was it an Anglo-Saxon name? Maybe, a distant cousin to Edith. There are other possibilities, but I think this one is mystery.

Daisy – If Ardita is a rarity, Daisy is a long-time favorite, on the rise again today. And everyone knows Daisy Fay Buchanan, the long-time love of Jay Gatsby. She’s the reason for his decadent parties, even though she’s married to another man. Daisy isn’t exactly a role model, but she is gorgeous and memorable, and adds a certain Jazz Age glamour to the name. The character was based on a real life love of Fitzgerald’s, named Ginevra.

Jordan – The rise of Jordan as a baby name is tied to two things. Originally, the Biblical river inspired returning Crusaders to give the name to their children. Centuries later, basketball great Michael Jordan boosted his surname for our sons and daughters. But in between, Fitzgerald gave us Jordan Baker, and a reason for this name to feel literary and feminine, too. Miss Baker was a golfer, and her name came from two motor car companies – appropriate since the character was thoroughly modern, and maybe – by the standards of 1925 – a little fast. Jordan was also based on a real person, Ginevra’s friend, Edith.

Josephine – Why does Josephine sound like such a Jazz Age name? Two reasons. Dancer Josephine Baker, whose career started in the 1920s, is certainly a big part of the story. But there’s also F Scott Fitzgerald’s Josephine Perry stories. Strictly speaking, the stories aren’t part of the 1920s – the first of five wasn’t published until 1930 – but I think the name feels tied to the era.

Honoria – 1931 short story Babylon Revisited became the basis for 1954’s The Last Time I Saw Paris, starring Elizabeth Taylor. It’s based on real events from the Fitzgerald’s life, and decisions about the care of young Scottie Fitzgerald, Scott and Zelda’s daughter. In the short story, the daughter became Honoria. In the movie, the girl is called Vickie. But my favorite of the three is Honoria, a name that also appears in PG Wodehouse stories, and likely the rarest of the three.

Kismine – Rarer than Honoria or even Ardita is Kismine. The name was used in The Diamond as Big as the Ritz, a 1922 novella about a fabulously wealthy family who makes their money from a diamond mine they maintain in strict secrecy. Kismine is one of the sisters; Jasmine is the other. She’s not exactly admirable, and yet I did find a very few women who seem to be named after the character, especially after it was adapted for television in 1955.

Marjorie – She’s the pretty cousin in Bernice Bobs Her Hair. Much as I really enjoy this story, and find this name a charming retro possibility, I’m reminded again that Fitzgerald’s characters aren’t always likable.

Rosalind – Shakespeare used this name in As You Like It, while Fitzgerald borrowed it for This Side of Paradise. Paradise was his debut novel. It’s said that the character of Rosalind was based on Zelda Fitzgerald.

Rosemary – Tender is the Night was the final novel Fitzgerald completed in his lifetime. The story focused on American couple Dick and Nicole Diver, living abroad in the South of France. Rosemary is a young actress, drawn into their social circle. I won’t spoil the rest, but there’s no happy ending. Still, I love this name, and seeing it in Tender is the Night lends it a jazzy, even edgy, vibe.

Amory – Fitzgerald’s debut novel was This Side of Paradise, and I think Amory might be the ultimate of the F Scott Fitzgerald baby names. It’s preppy and polished, slightly unexpected, and fits the character exactly.

Blaine – Speaking of Amory, his surname is Blaine. If you remember Pretty in Pink, it was also the given name of James Spader’s very awful character. And yet, centuries before John Hughes, it was a Scottish saint’s name, and it does feel like an on-trend possibility today.

Gatsby – Possibly the most obvious of the F Scott Fitzgerald baby names! Gatsby was the adopted surname of Jimmy Gatz, part of his total reinvention as he transformed himself from an ordinary Joe to a dazzlingly wealthy Jay. It’s a real surname, though, based on an English place name with Norse roots. It’s been in use in the US for generations. Visit Alexandria, Virginia, just outside of the nation’s capital, and you can even dine at Gadsby’s Tavern, a tavern that dates to 1785 and was frequented by George Washington, among other notables.

Lincoln – Another preppy, presidential name, and a character from Fitzgerald’s Babylon Revisited.

Miles – Miles was the name of the director in Fitzgerald’s 1930s era Crazy Sunday. It’s based on Fitzgerald’s experiences working in Hollywood, as is his last-ever novel, The Last Tycoon.

Monroe – When Fitzgerald died at the age of 44, The Last Tycoon remained incomplete. It was another story set in Hollywood. This time, Fitzgerald’s fictional director was named Monroe. It’s a presidential surname name that fits in with Milo and Arlo – but also could pick up on our affection for Hollywood surnames for girls, thanks to Marilyn Monroe.

Nelson – I keep expecting Nelson to catch on! I was looking for it after the death of Nelson Mandela in late 2013, but it didn’t happen. Turns out it also makes the list of F Scott Fitzgerald baby names, thanks to his 1930 short story One Trip Abroad.

Roscoe – If you’ve seen the 2008 movie, The Curious Case of Benjamin Button, you know a little bit about F Scott Fitzgerald’s 1922 short story. But only a little. The story in the movie is different, as are the character names. In the short story, Roscoe is Benjamin’s son, who eventually becomes his caregiver as Benjamin reverse ages. I think Roscoe should be right behind Milo and Arlo for great o-ending boy names. Bonus? Unlike Monroe, I can’t see this one being borrowed by the girls.

Did I leave off any of your favorite F Scott Fitzgerald baby names? Are there any on this list that you would consider?