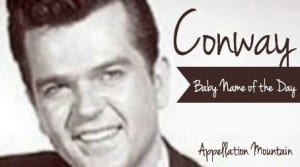 It’s an Irish surname name with a healthy dose of Americana.

Thanks to Emilee for suggesting Conway as our Baby Name of the Day.

Conway comes to us from Ireland and Wales, where it’s the Anglicized form of more than one name, including:

It’s a curious bunch of origin stories, and there are also possible Welsh and Scottish place names associated with Conway.

Let’s say that the meaning is unclear, but the sound is unmistakable.

Harold Lloyd Jenkins was born in Mississippi in 1933, and would go on to score a record-setting forty – yup, forty! – number one hits on the Billboard country charts.

Harold Lloyd was inspired by a silent movie actor’s name, but the future Country Music Hall of Famer felt it wasn’t quite right for a star.

There’s more than one story about how Harold became Conway.

Some say the singer saw a road sign for two places, one called Conway and one called Twitty. It stuck.

Others say that he met a man named Conway Twitty, and he decided to steal the name. There was another Twitty, and in the 1960s, he recorded “What’s in a Name but Trouble,” lamenting the loss of his name to Harold Jenkins. Or so they say – I can’t find a recording of the tune.

By 1958, Twitty was starting to enjoy some professional success as a rock ‘n’ roll singer, but a decade later, he’d firmly gone Nashville. His biggest hit was 1970’s “Hello Darlin’,” followed by a string of successful duets with Loretta Lynn. 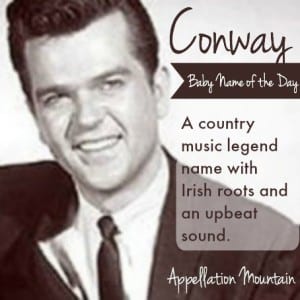 While Mr. Twitty’s musical legacy isn’t in doubt, were any parents inspired to name their baby after him?

Actually, it turns out that there were a handful of Conways prior to the late 1950s, when someone might have been inspired by the musician. (And lending credence to the possibility that Mr. Twitty borrowed his name.)

Doubtless some of that is because it’s a familiar surname, and family surnames have long been handed down as first names. It’s a popular place name, too.

There was an increase in the name’s use in the 1910s. Could credit go to band leader Patrick Conway? Conway’s Band had some success in the decade.

In the 1930s and 40s, actor Jack Conway became better known as a director – but that seems like a poor explanation for the name’s peak in 1924, when 56 boys were given the name.

What we can conclude is that Mr. Twitty wasn’t a big influence on the name’s use. During the 1960s, 70s, and 80s, it was rare. Only in recent decades has Conway seen an uptick. That’s probably due to our affection for surname names, and perhaps some crossover from other country-inspired appellations like Cash.

In 2014, there were 34 newborn boys given the name – a respectable number.

If you’re lucky enough to find this one on your family tree, it might make for a distinctive first name choice. Or if you’re simply after a distinctive name that will be instantly recognized but rarely shared, Conway is one to consider.

What do you think of Conway? Does it work as a given name?