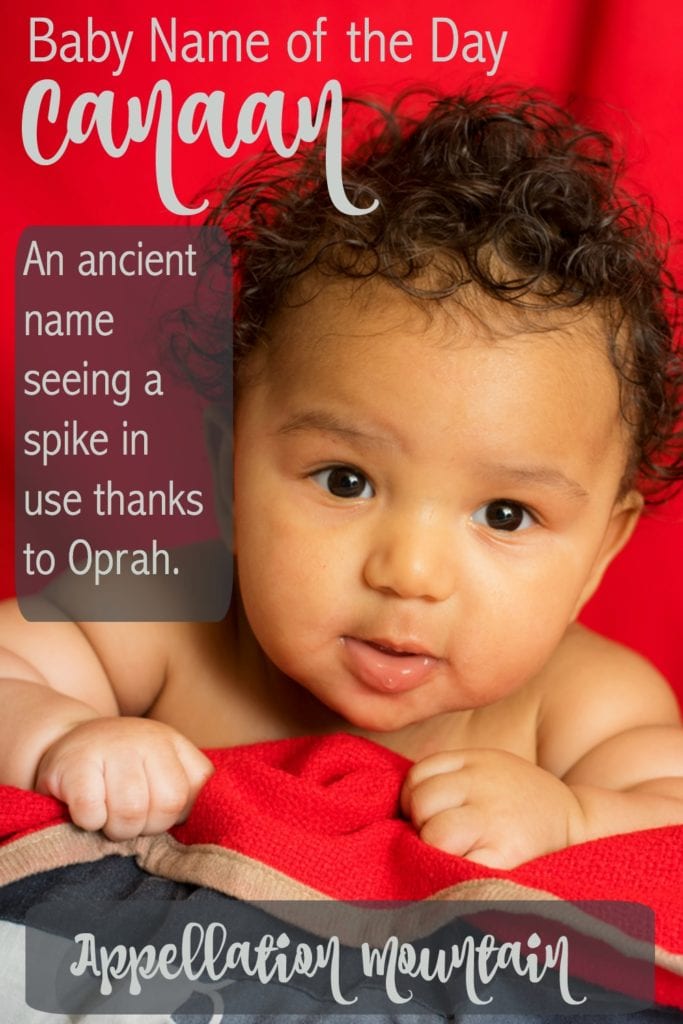 Canaan owes a surge in usage to none other than Oprah Winfrey.

Debuts and returns week continues with this Biblical Baby Name of the Day.

Canaan: Genesis and Beyond

The Land of Canaan likely existed  before the Old Testament was written. That dates it to the second millennium BC – or maybe earlier.

The exact location is fuzzy, because the name referred to different places with shifting borders over the years. Coins from Phoenicia bore the name around a relatively recent 500 BC. A colony of the New Kingdom of Egypt was called Canaan back in the sixteenth century BC.

Ancient names are often hard to unpack. Some sources give the meaning as lowlands. Others say it means subjugated.

An appealing theory links it to the color purple. In Babylon, the Kassites produced purple day as early as 1600 BC. The Phoenicians created a similar dye in the same era. It’s possible that the place name came from one of the words or locations associated with purple dye – and yet, most dismiss this as fanciful invention.

In the Book of Genesis, Canaan is Noah’s grandson, by his son Ham. If you know your Old Testament, you might hear these names and immediately think of the Curse of Ham, actually a curse visited on Ham’s son.

The details of the curse – and why Canaan was punished for Ham’s transgression – are the subject of much theological debate. In centuries past, some cited the curse as justification for slavery. Thankfully, those days are over.

It may explain why parents seem to have avoided this Biblical name, even as other obscurities saw use. Canaan was first given to more than five boys in 1973, in contrast to Obadiah (first recorded in 1914), Zebulon (1891), or Jubal (1956).

Searching the 1940 US Census confirmed the name’s rarity. I confirmed just five uses as a given name.

Parents appreciate two-syllable, ends-in-n names for boys. The long ‘a’ sound has been stylish, in names like Mason and Aidan. Factor in the name’s Biblical status, and it comes as no surprise that Canaan was already gaining. 93 boys received the name in 2000. By 2014, that number soared to 179.

Nashville songwriter Canaan Smith competed on The Amazing Race in 2009, contributing to the name’s rise.

Could it be thanks to one mention in a speech in Melbourne?

Oprah Winfrey, the wildly influential and beloved media mogul, told an audience about her difficult childhood. Abuse led to pregnancy at the age of fourteen, and a miscarriage. Many years, Oprah chose to name her son Canaan.

While her loss was in the past, her name choice was recent, and fits with current trends. That makes sense.

That’s half right. Canaan might not mean new land, but it symbolizes those things. After all, it’s fairly common as part of church names, and in Exodus, Canaan is the promised land. The Israelites begin conquering the new territory with the Battle of Jericho, and Jericho has also rose as a given name in recent years.

Oprah’s speech came in early December, but it’s impossible to access national data on newborn names and birth dates. (This clever tool pairs another data source to draw some conclusions – but only for names popular decades earlier.)

Parents searching for a meaningful boy’s name both ancient and stylish should add this one to their lists.

Would this name have cracked the Top 1000 even without Oprah’s remarks?