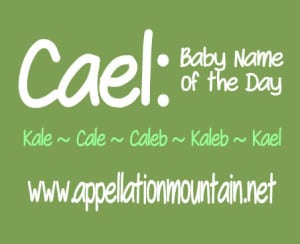 Cael is a legendary warrior.  Kale is leafy and green.  Bundle them together, and it makes for an up and coming boys’ name.

Thanks to Kari for suggesting her new son’s name as our Baby Name of the Day.

Short names for boys are all the rage.  There’s the retro Max and Gus, the modern Gage and Cade, the enduring Jack and Luke.  Whatever your style, there’s a good chance some of the boys’ names on your list are just one syllable.

Irish myth gives us Cáel, a young warrior.  He has just married his true love when he goes off to war.  His wife follows, nursing the wounded.  Cael fights valiantly, and his side wins.  On the final day, he’s pursuing the vanquished as they flee into the ocean – and Cael drowns.

His body is recovered and carried back to camp.  When his wife sees her fallen husband, she dies of heartbreak.  Instead of celebrating their victory, the day turns to mourning.

Then there’s another Cael, Cael of the Iron.  He first appears in a collection of stories compiled by James Stephens and published in 1920.  His Cael is the son of the King of Thessaly.  He challenges the Irish warriors to find their best champion to beat him in a race.  The stakes?  Cael will rule Ireland if he wins.

Finn McCool accepts, but chooses an unlikely competitor for his side.  Carl of the Drab Coat looks like no match for the mighty Cael.  A sixty-mile race course is set, and the two vie for the lead.  Carl wins – and reveals that he’s not just some schlub who happens to be fleet of foot.  He’s a fairy lord who sends Cael packing, back to his kingdom.

All of their names come from caol – slender.

But there’s more to Cael’s tale than a kelly green pedigree.  In recent years, American parents have been wild about the sound:

While Kaylin is typically given to girls, the rise of names like Kayden and Cayson for boys has helped boost Cael, too.

It is also sometimes a surname, with many possible origins.

A quick word about the vegetable – it’s widely used, has a long history, and packs a nutrient punch.  It can also be quite attractive, with ornamental varieties grown.  If girls can be Clementine, why can’t boys be Kale?

So let’s say you’re sold on the sound.  Which spelling do you use?  Cale and Kale are phonetically easier, but let’s face it – you’ll have to spell this one regardless.  So if you’re attracted to his Irish roots, the distinctive Cael might be the best possible choice.