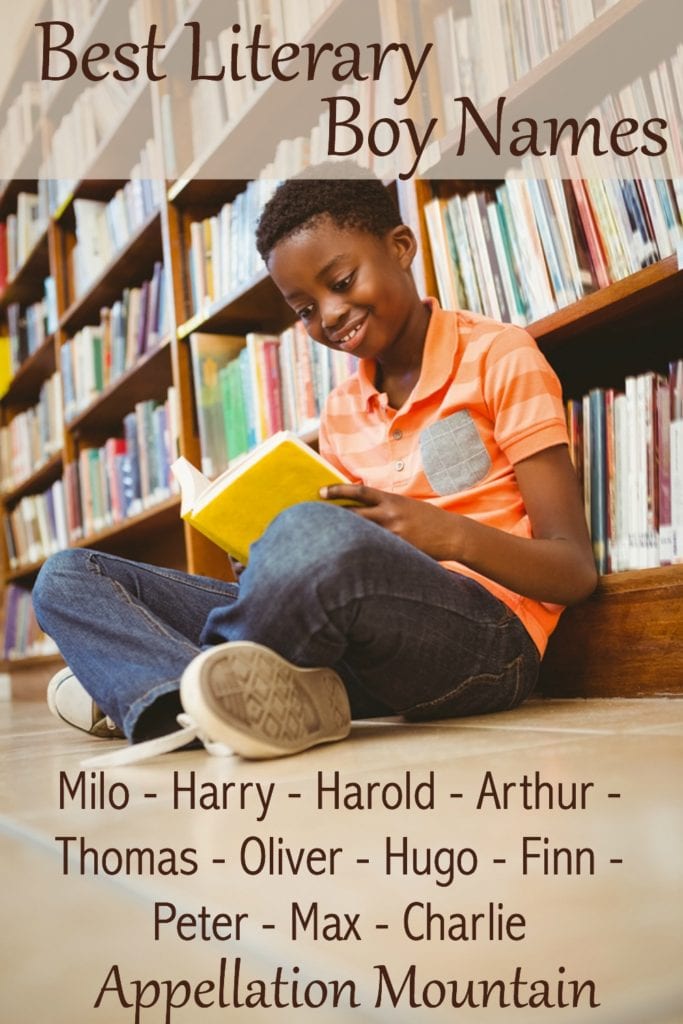 What are the best literary boy names, borrowed from our favorite childhood stories?

And yet the list of literary boy names stretches longer than I first imagined. A few of these probably spring to mind instantly. Others seemed obvious only as I reviewed lists of favorite children’s books.

The number of repeats surprised me, too. While this list isn’t ranked in strict good-to-best order, the literary boy names that occur again and again did move towards the top.

One rule: the name had to either be in title of the story, or instantly identifiable with the main character. That last one is a judgment call, but I think all of these satisfy the requirement.

The Phantom Toolbooth remains a classic, long after it was first published way back in 1961. It’s the tale of young Milo, who drives his toy car into the Kingdom of Wisdom.

While Milo can claim history galore, by the 1950s, the name was nearly extinct in the US. Author Norman Juster described himself as an “odd” child, and perhaps the choice of such an offbeat name reflects something in the character – and the author, too.

Today, of course, the name has reversed. It entered the US Top 300 for the first time ever in 2015. Actor Milo Ventimiglia – of Gilmore Girls, Heroes, and many other shows – has helped. But mostly it’s a mix of our affection for Miles, as well as ends in o names for boys.

Is Harry Potter a literary character? Or a world-wide, pop culture behemoth? Theme parks include life-sized replicas of the wizarding world Harry inhabits. I think you could go nearly anywhere on Earth and the name would be recognized.

And yet, Harry began as a humble literary character, and so he makes this list. There are plenty of other Harrys, of course. Truman. Styles. Dirty. Prince.

In the US, none of that matters. Harry languishes at the far end of the US Top 1000. (Though we’re quite fond of Henry and Harrison.) In the UK, however, Harry rules, ranking in the England & Wales Top Ten for at least a decade.

Few children’s books charm me the way Harold and the Purple Crayon does. I’d never read it as a child, but we received it as a gift for my son. I loved it instantly. Imagination and resourcefulness solve problems – yes!

Maybe that’s why I love the name Harold. Like Harry, Harold teeters on the edge of the US Top 1000. But like all antique names, there will come a moment when Harold feels ready for revival.

Read the book a few times, and you might agree that the moment can’t come soon enough!

After watching too many PBS Kids adaptations of the Arthur books, I’d almost forgotten that Marc Brown’s anthropomorphic aardvark started life as a book character. He wrote dozens of installments, beginning in 1976 and continuing as recently as 2011.

Chances are that Arthur makes you think of Camelot’s legendary king. That’s another side to the name. But if King Arthur reigns in certain circles, young school-aged children almost certainly think of the animated character.

A long-time Top 100 – and even Top Twenty name – Arthur slowly returned to greater use over the last few years. Like Milo, Arthur is now in the US Top 300, and poised to climb higher.

If Harry is better known through his movies, and Arthur most recognized on television, Thomas stakes his claim in the toy aisle.

Thomas the Tank Engine started out as a series of children’s stories written by the Reverend Wilbert Awdry. The Railway Series first appeared in the 1940s. (Thomas does not actually appear in the very first story!)

In recent decades, collecting the little wooden trains and tracks (and associated railway accoutrements) has become a rite of passage, especially for train-obsessed toddlers. The show remains wildly popular, too, and a life-sized Thomas even makes appearances.

But the core of Thomas are those stories, and they’re still widely read, making Thomas one of the obvious literary boy names.

Do children read Charles Dickens’ Oliver Twist? I don’t believe they do. And yet some version of the story seems widely known, even to children of young ages.

Credit the 1960 musical adaptation, Oliver! It’s a lighter take on the often dark tale. In fact, I suspect it’s the one that most of us know best. It explains why Oliver feels like a companion for these literary boy names – they’re kind, brave, and ultimately earn happy endings.

In recent years, Oliver has soared up the popularity charts in the US. Could some it be due to the name’s literary status, a brother for Emma?

The Invention of Hugo Cabret counts as the newest source of literary boy names. Published in 2007, author Brian Selznick created the world of orphaned Hugo. The child lives in a train station in Paris during the 1930s, fixing the clocks. Part-adventure, part-fantasy, the book became an instant success.

An equally acclaimed 2011 movie adaptation changed just a few details, including the name. It became known simply as Hugo.

Hugo, fueled by the same o-ending as Milo, has gained in the US in recent years. In the UK, it’s become a solid Top 100 choice.

I’m never sure if Oliver Twist is meant for children, but Mark Twain’s novels? They feel like they were meant for younger readers.

It’s tough to narrow down the list of possible names to just one. After all, popular surname name Sawyer owes much to The Adventures of Tom Sawyer. But I think Finn deserves the place on the list.

First, Finn feels like a storybook name. Long before Samuel Clemens set foot on a riverboat, Finn McCool starred in Irish myth and legend. It evolved independently as a Scandinavian name, too. Today, Finn fits right in with all of those single syllable boy names we love.

Peter Rabbit first appeared in 1902, one of Beatrix Potter’s many anthropomorphic animal creations. The bunny has been with us ever since, starring in many an adaptation. A new movie version is currently slated for 2018.

The very same year Peter Rabbit first ventured into Farmer McGregor’s garden, JM Barrie introduced his beloved character, Peter Pan. His Peter wasn’t fully developed in 1902’s Little White Bird. It took a few more years before Peter Pan; or, The Boy Who Wouldn’t Grow Up became a stage play in 1904, and finally a novel in 1911.

One more reference: Ezra Jack Keats changed the way we think about children’s picture books with 1962’s The Snowy Day. The story featured Peter – an African-American boy – in the city. Both Peter’s race and the story’s urban setting marked departures for children’s literature. Peter appeared in six more books, and cements the name among literary names for boys.

Combined, Peter makes a powerful pick from children’s literature. The traditional name is gaining modestly in the UK, but seems to remain in style limbo in the US. That’s a great opportunity for parents seeking a traditional, but underused, name for a son.

Where the Wild Things Are opens with these lines:

Maurice Sendak’s 1963 book remains a beloved classic. Despite a great many famous Maxes over the years, the adventures of the wolf-suit wearing boy instantly come to mind.

One more association for Max: the rabbit Max, of Max and Ruby fame. The siblings were invented by children’s book author Rosemary Wells. The books have inspired a successful animated television show, too.

As given names, Max and the many longer forms have had a good run in recent years. While Max, Maxwell, and Maximus are sliding, Maximo and Maximilian are still climbing.

I’ve saved the king of the literary boy names for last.

Why Charlie? First, Roald Dahl’s immortal Charlie Bucket, of Charlie and the Chocolate Factory and Charlie and the Great Glass Elevator makes this an obvious choice for literary boy names.

But there’s also Charlie and Lola, a series of picture books about a brother and sister by English writer and illustrator Lauren Child.

Charlie Brown doesn’t quite belong with literary boy names, though The Peanuts have appeared in book form.

There’s even a Charlie Weasley in the Harry Potter series.

Overall, if you’re looking for literary boy names, I think Charlie ranks at the top of the list.

Your turn! Which literary boy names are your favorites? Which ones would you add to this list?