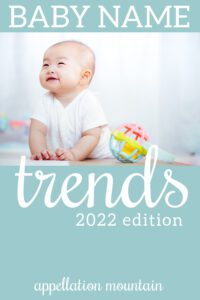 With the new US popularity data out, it’s time to talk baby name trends.

At first glance, the new US Top Ten isn’t too terribly interesting. It looks a lot like last year’s list.

But that hides some interesting undercurrents.

Are we witnessing the end of a true #1 name?

If you know school-aged kids, chances are you’ve met an Olivia or a Liam. Probably an Ava and a Mason, too.

But not five of them.

Something fascinating has happened to names in recent decades. Parents are more and more wary of choosing a too-popular name.

And data about popularity is easily accessible, even unmissable.

Proof? The 60-something priest who serves as principal of my son’s school recently mentioned the data. I suppose he baptizes a lot of babies, but he’s clearly not naming any himself. Still, the information stayed with him, part of what we all talk about in casual conversation.

So yes, ask nearly anyone and they can rattle off Sophia, Isabella, Noah, Benjamin.

The chart-topping favorites can start to sound almost rare. Or, at least, they seldom repeat – not in the way that Michael and Jennifer, Ashley and John did in earlier generations.

But it just isn’t what it used to be.

The biggest change in the US Top Ten was at the fringes of the boys’ list. Theodore leapt thirteen spaces to enter the list at #10. It’s the highest ranking ever for that classic name.

Right behind Theodore, #11 Jack and #12 Levi also posted considerable increases in use.

The thing about the current Top Ten is this: it’s a little stale. It’s not that the most popular names are quickly gaining in use. Some are actually falling. But nothing has gained enough momentum to replace them.

Normally we see far more churn on the girls’ side, where names cycle in and out of favor more quickly.

But now boy names have caught up. From vowel-endings to creative borrowings from virtues and the natural world, we are every bit as open to bold, unexpected names for our sons as we are for our daughters.

More proof? The formerly always in the Top 25 list for boys included classics like Joseph, John, James, and William. James and William remain, but evergreen John and Joseph – classics though they may be – continue to slip in popularity.

While some of the new Top 100 names feel a little wild – Maverick and Waylon! – in many cases, it’s not that we’re choosing especially bold names for our sons. We’re just open to a wider list of possibilities, and that makes for more volatility in the rankings.

I’d call it a good thing.

This is the post-Khaleesi generation.

Television has always influenced names. Movies, too. But television series that we watch over weeks or months or years? Those are the names that we become accustomed to, the possibilities that naturally rise to the top of the list when we’re naming our children.

But we tended to play it a little bit safe in the past.

We didn’t necessarily name our children for science fiction characters, unless those names were well-established. Star Wars boosted Luke, but not Lando or Han.

Those days are over.

Parents don’t hesitate to name their children after their favorite fandoms. From Vampire Diaries to Supernatural, Harry Potter to Game of Thrones, many a surprising name has come from a character that’s not entirely human. And that feels much less shocking than it did even a decade ago. I’m barely blinking an eye at Lucifer’s Mazikeen or Star Wars’ Anakin.

Oh, and a side note to this phenomenon: streaming can turn blockbuster movies watched on repeat to the equivalent of television series. Think about it: Disney names Raya and Luca are white hot favorites for the year. That’s almost certainly thanks, in part, to families watching the movies not once in a theater – but many times in their living rooms.

Let’s talk about categories of names that are having a moment.

At first glance, they’re surname-like. And some of these do appear as last names in some languages or moments in time.

But they owe their appeal to their mix and match quality – popular name elements, blended with a dash of creativity.

It’s not new. It’s the very opposite of new.

Lily might’ve been the first name in this category. Ecovintage names are borrowed from the natural world by way of the Victorians. Or they just sound like they would have been at home in an earlier era.

Hazel and Jasper are ecovintage. Meadow and River are eco, but not vintage. It’s the combination of both qualities that make for a fascinating category of names.

And like synthetic surnames, many of them started out in the last spot.

Thanks to a mix of sound and associations, they’re names that sound at-home on a Harley or in a prep school blazer.

When it comes to names, Hollywood A-listers occasionally inspire The Next Big Thing in baby names.

The Jolie-Pitts helped spark an ends-with-X wave for boy names.

But much of the time, celebrities choose names that were already trending. Or go so far afield that none of us are brave enough to duplicate Apple, Suri, or Pilot; Kulture, Zillion Heir, or Exa Dark Siderael.

Instead, social media influencers and reality stars tend to sway what parents name their children. They’re famous, but in an accessible way. Think of Larry Hernandez’s Daleyza, Dalary, and Dalett. Or Alaia, a name boosted, in part, by the ACE Family on YouTube.

It makes sense. After all, we carry influencers in our pockets, hear them in our ears, and catch their updates with fleeting seconds of our attention. The names they choose for their children inevitably stay with us – especially when they share details of their lives and naming process so openly.

What baby name trends are you seeing?