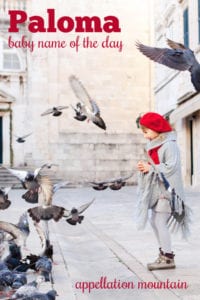 Paloma combines a lovely meaning with a Spanish – and artistic – heritage, while still working beautifully in English.

Thanks to Joanna for suggesting our Baby Name of the Day.

Because if you’re going to be technical about things, Paloma comes from the Latin palumba – wood pigeon. But if you’re naming a child, you’re likely to prefer the bird’s other identity – dove, same bird, but from the Old Norse.

The bird isn’t just a bird, at least not when it is a dove. White doves symbolize peace. The dove is also a Christian symbol of the Holy Spirit. In the Old Testament, Noah released a dove; when it returned carrying an olive branch, he knew there was land – somewhere. Other religious traditions attach importance to pigeons, too. It is quite a bit of weight for a small bird.

Then there’s the folk song, “La Paloma.” Sebastian Yradier penned the song in the 1860s. I suspect this is the bridge between the bird and the name. The ballad is clearly about the dove, but the lyrics are all about romance. It’s been much translated and performed in many languages.

Maybe that was part of Pablo Picasso’s inspiration when he named his youngest child Anne Paloma in 1949. She was born in April; that same month, the World Peace Congress adopted Picasso’s image of a dove, La Colombe, as their symbol. It was no mere coincidence, either. A year later, Picasso addressed the conference, noting that his father – also a painter and professor of art – had taught him to draw doves. His works are famous for their anti-war themes, like his staggering accomplishment Guernica.

I assume the name Anne was required by French authorities, or perhaps the church – to the best of my knowledge, she was always called Paloma. Even without the backstory to her name, she was the subject of several of dad’s paintings, lending Paloma some real artistic style. Plus the youngest Picasso is no slouch herself. She’s designed jewelry, including a collection for Tiffany & Co., and perfume, among other ventures.

Paloma also has that oh-so-current o sound – a logical way to get to Lola. Actress Ana Ortiz has a toddler called Paloma Louise, and she’s not alone. Paloma first cracked the US Top 1000 in 1993. By 2010 she’d reached #698. That’s not exactly Isabella, but it probably appeals to many parents seeking a cultural-spanning feminine name that sounds pretty without being in any way lightweight. But in recent years, the name has slipped to just #912 – which could signal an opportunity.

With ties to nature and the arts, her meaningful associations, and her cultural-spanning sound, it is hard to find a name as appealing as Paloma.