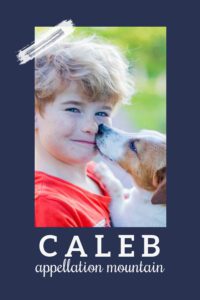 We love to give our children names borrowed from animals, whether it’s subtle Leo or straight-up Bear or Wren.

But Dog is not a given name. We still use it as an insult, at least some of the time. Dog the Bounty Hunter was born Duane, and despite his pop culture success, failed to encourage parents to name their children for him.

When it comes to names with problematic or unclear meanings, the baby name Caleb isn’t alone. And really, the disputed meaning hasn’t held this name back one bit.

The original Caleb was one of the Old Testament faithful. After the Hebrews spent forty years in the desert, only he and Joshua entered Canaan.

That makes the baby name Caleb a logical choice for parents seeking Biblical names. Easy to spell and pronounce, it was well-used in the English-speaking world during the eighteenth and nineteenth centuries.

That means that Colonial and early American Calebs were plentiful, fitting right in with so many Old Testament names embraced by parents in a post-Reformation world.

Before there were soap operas and movies and popular novels, Caleb had a good run in the Colonial and Early American era.

Caleb Cheeshahteaumuck became the first Native American graduate of Harvard, in the year 1665. Caleb Pusey was a friend and business partner of William Penn, founder of Pennsylvania. Pusey arrived in the colony in the year 1682.

Notable bearers of the name continue throughout the next few centuries.

Even if you didn’t find the baby name Caleb in a history book, fiction kept it familiar.

George Eliot gave us kindly Caleb Garth in Middlemarch, published in 1871 and 1872.

Nearly a century later, John Steinbeck gave the name to one of the brothers in his 1952 novel East of Eden. But for the 1955 film adaptation, the character became Cal.

In 1954, Caleb is among the siblings in Seven Brides for Seven Brothers. (He marries Ruth.) The 1954 movie led to a 1982 television series, but they changed Caleb’s name to Crane.

The picture that emerges is a traditional boy’s name, steady and true.

Despite a long history of use, the baby name Caleb left the US Top 1000 briefly early in the twentieth century. From 1926 to 1963, it failed to rank at all.

But the name slowly made a comeback.

Anne Tyler’s 1975 novel Searching for Caleb is an enduring story about the Peck family.

In 1986 children’s book, Sarah, Plain and Tall, we meet another Caleb. The story about homesteaders in the Midwestern US during the nineteenth century has several sequels, including Caleb’s Story.

However, soap operas probably get credit for really tipping the baby name Caleb into the US Top 100.

As The World Turns introduced a character named Caleb Snyder in 1988. By 1989, the baby name Caleb ranked #91.

It had the magic formula sought by so many parents: a cool, current, and distinctive sound paired with plenty of history.

We can count so many current Calebs. There’s the frontman of indie band Kings of Leon, Caleb Followill. Actors include Stranger Things‘ Caleb McLaughlin.

Athletes, writers, and plenty more actors and musicians round out the list.

If you’re looking for a rock solid name for son, Caleb fits.

What do you think of the baby name Caleb? 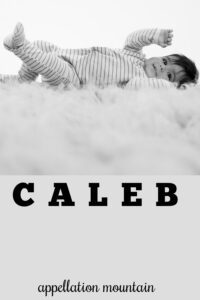