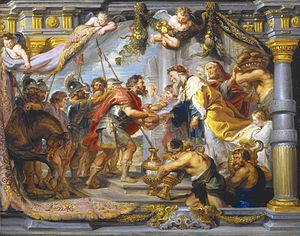 Thanks to Lindsay for suggesting Abram as our Baby Name of the Day.

Many an Old Testament figure took a new name. Abram became Abraham in the Book of Genesis, and from there became the father of the Israelites, dad to Isaac and Ishmael, as well as ancestor of Moses, Jesus, and Mohammed. He’s significant in Christianity, Judaism, and Islam, and there’s really too much of his tale to tell here. Suffice to say that either Abram or Abraham is a name that ripples with a certain spiritual currency.

The meaning of Abram is pretty straightforward.  The ab- element comes from father, and -ram means exalted.  There’s some lively debate about the meaning of the switcheroo from -ram to -raham, but the consensus seems to be that –raham means multitudes – hence, the father of all those Israelites and world-changers.

Abraham, worn by a host of saints and martyrs as well as the ill-fated American President Lincoln, has remained in the US Top 500 every year since 1880. As of 2012, he stood steady at #194.

Abram has always been a few steps behind, frequently out of the Top 1000 entirely, and coming in at just #392 last year.

There is a subtle stylistic difference between the full bearded patriarchal qualities of Abraham and the slimmed down, youthful Abram. Notables have worn both forms, but if we limit our list to the latter, there’s:

Perhaps Abram’s greatest appeal is his spare sound, one that nudges him closer to Bram, as in Stoker, the author of legendary vampire novel Dracula. (Though Stoker was born Abraham.) You could, of course, also use the standby Abe as a short form, one that is perfectly stylish in our era of Gus and Max, but he does feel a little stovepipe hat.

Abram makes for a great, underused Old Testament name. He’s rarer than Aaron, more conventionally masculine than Elijah. If you’re looking for a globe-spanning A-name with history, Abram is one to consider.