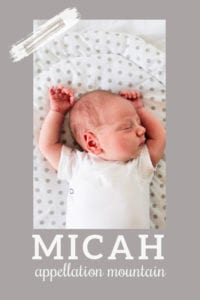 The baby name Micah belongs to that cluster of ancient names completely at home in the twenty-first century.

Thanks to Jeanne for suggesting her son’s name as our Baby Name of the Day.

More than one Old Testament figure answers to Micaiah, a Hebrew name meaning “who is like God?”

It’s a unisex name, too, used for male and female figures alike.

The baby name Micah evolved as a contracted form of Micaiah.

It’s most familiar as the name of a (male) prophet from the Old Testament, author of the Book of Micah.

Like many an Old Testament name, some Protestant families embraced it following the Reformation, but this one never really caught on.

Some of that is down to classic boy name Michael.

A name used widely across Europe, Michael was never unfamiliar in the US. But you’ll note that the history books serve up many fewer Mikes – at least when compared to James or John. It’s relatively uncommon, at least in English, for many centuries.

That’s a lot of Michaels. Just ask Landon, Jordan (and B. Jordan!), Phelps, Pence, Tyson,  Jackson, J. Fox, Cera, Kors, Piazza, Irvin … and on and on and on. And that’s not even considering the fictional Mikes, from Brady to Corleone.

The trendline is clear: as Michael became a go-to favorite, plenty of parents embraced the baby name Micah as a similar-but-different alternative.

It’s worth noting that Micah rose in use for our daughters at the same time.

Perhaps some parents saw it as a feminine form of Micah. The a-ending may simply have suggested to some that it was a girl’s name. And, of course, Micaiah – the original – was unisex to begin with.

But while it’s been used in steady numbers for girls, this name has remained firmly Team Blue. As of 2016, Micah ranked just #950 for girls.

For boys, on the other hand, the baby name Micah rose steadily.

That makes Micah one of the earliest a-ending boy names to really catch on. Ezra, Elijah, Isaiah, Josiah, Luca, and former top names Joshua and Noah are all more popular now. But back in 1959? None of those names were popular, and several – including Noah – didn’t even make the Top 1000 list.

The similarity to Michael helped parents view Micah as a viable alternative.

In 2006, we met a child called Micah on NBC’s Heroes. The series ran through 2010; the baby name Micah rose steadily over the seasons, and peaked in 2011.

That’s not the only pop culture reference, of course. Celebrities named their sons Micah, and other fictional characters could’ve influenced the name’s rise. Country music drama Nashville also included a child character by the name.

Even absent a compelling pop culture story, the baby name Micah seems like an obvious choice for a son born today.

It’s a refreshing update to traditional Michael. It fits right in with so many a-ending boy names. And it’s easy to spell and pronounce, the kind of name that’s just different enough to seem refreshing.

If you’re seeking names that are traditional-but-not-too-traditional, Micah might be the perfect choice, a name equal parts ancient and modern, one your son will seldom have to share.

What do you think of the baby name Micah? 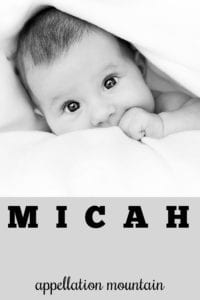