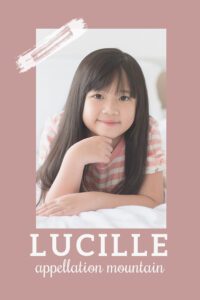 The baby name Lucille combines a great meaning with plenty of vintage charm.

Thanks to Lesley for suggesting our Baby Name of the Day.

Sometimes tracing a name’s origin seems just about impossible. It’s a tangle of languages and meanings, with no clear starting point.

But the baby name Lucille follows an orderly path, from ancient Lucius to the name we known today.

Back in the Roman world, Lucius was a favorite – maybe a little like Henry circa 2021. Plenty of accomplished men answered to the name. It’s the given name of the philosopher Seneca, two rulers of Rome, and a handful of early Popes.

Roman families almost always had a feminine form of any masculine name, and Lucius was no exception. Enter Lucia. It, too, was familiar in the early centuries BC. Saint Lucia of Syracuse lived in the 300s and became a favorite medieval saint, helping to spread her name far and wide.

In fact, the saint’s story made Lucia popular across Europe in the Middle Ages. Lucy, in turn, developed as the typical English form of the name.

Lucilla was yet another twist on Lucia. Second century Emperor Marcus Aurelius gave the name to his daughter. If you remember Gladiator, a fictional version of Lucilla played a key role in the film.

Take Lucilla, bring it to France, and voilà – the baby name Lucille.

The spelling Lucile also surfaced in both French and English.

The opera Lucile debuted in 1769, by André Grétry. It’s not much performed in recent decades. (Though opera fans might think of the late soprano Lucilla Udovich, an international star in the 1960s.)

A famous poem by Robert Bulwer-Lytton used the name as a title in 1860.

Popularity data is available in the US from 1880 onward. That coincides with the baby name Lucille’s peak.

Conventional wisdom holds that it takes about one hundred years for a name to cycle in, out, and back into fashion again.

As of 2020, the name sits at #271. That’s a far cry from the baby name Lucille’s previous heights. But it’s still a well-known name, and one rising steadily in use.

Oh, and Lucile – spelled with one L? It also had a good run in the same years as Lucille. But it has always been the less common spelling. As of 2020, just 22 girls were named Lucile, meaning that it is nearly extinct.

The baby name Lucille takes a musical turn midway through the twentieth century.

Legendary musician BB King named all of his guitars Lucille.

Why? Early in his career, King was performing in Arkansas. The club was heated by a barrel filled with kerosene. A scuffle broke out, the barrel tipped, and the wooden building went up in flames.

During the rush to evacuate, King left his guitar behind. As the fire raged, he hurried back in to retrieve his beloved Gibson.

So where does Lucille come in?

Turns out that the two men whose fight knocked over the flaming barrel were arguing over a woman. And her name?

He even wrote a song about it.

But for many, it’s not BB King that comes to mind.

Born in 1911, the future comedian wasn’t just a comic genius and a television legend. She became the first female head of a major Hollywood studio.

But it’s I Love Lucy that cements her in our memory. The show debuted in 1951 and ran six full seasons. The Lucy-Desi Comedy Hour followed, continuing into 1960. She continued to work in television, both in front of the camera and at her studio, Desilu Productions.

With a shelf of Primetime Emmy Awards to her credit, among many other honors, she’s among the most celebrated women in television.

She makes the baby name Lucille playful – but also powerful.

Lucille Ball’s impact on pop culture is massive, but we have to return to music before the story is complete.

But it’s Kenny Roger’s “Lucille” that might come to mind for more people. His first big hit as a solo artist, “Lucille” is the story of a wife who walks out – told from the husband’s perspective. Rogers didn’t write it; Hal Bynum did. As it happened, Rogers’ mom was named … Lucille.

The song earned the 1977 Grammy Award for best country song, as well as the Country Music Awards’ song of the year.

Here’s the thing: if you’re keeping track, that means the last time the baby name Lucille was a big deal? Late 1970s. And it wasn’t a favorite for our children, either. The name had exited the US Top 1000 and lived on, mostly, in a country song.

That means that if you’re of an age to be naming a child today? You are almost certainly post-Kenny Rogers. Or at least, you’ve filed him in the Reagan era and/or know him mostly through his chain of fast-casual restaurants.

After all, a famous fictional Lucille was Lucille Bluth, the mom on Arrested Development. She would’ve been born during the last peak use of the name.

No surprise, then, that the baby name Lucille sounds fresh and sparky again. Like Josephine, it mixes elegance and energy.

Centuries of use across millennia, combined with a great meaning, make the baby name Lucille shining and strong. It’s a great stands-out/fits-in name for a daughter today.

What do you think of the baby name Lucille? 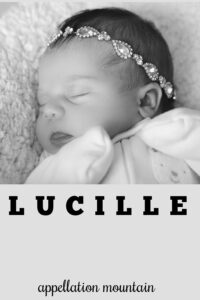