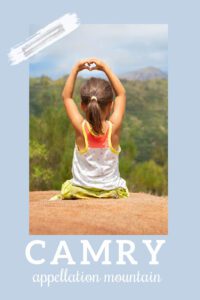 The baby name Camry crosses every continent, a contemporary name with a daring vibe.

Thanks to Kamree for suggesting her name as Baby Name of the Day.

Let’s begin with the Toyota Camry.

Introduced in 1982, it’s among the best-selling cars in the US.

The name comes from the Japanese word kanmuri – crown.

That’s because Toyota has followed a royal theme for naming their fleet since at least the 1950s, when there actually was a Toyota Crown. Other vehicles produced by the manufacturer across the world include the Corolla – small crown; the Tiara; the Atara – the Hebrew word for crown; and the Scepter.

We like regal-sounding names for our children, so that should make the baby name Camry appealing. But then again, we’re used to hearing the name associated with Toyota, so maybe it’s easy to forget that this name’s meaning is so commanding.

And yet, there’s no question the car gets credit for the name’s use.

It first appeared in the US data in 1985, with seven births for girls. In 1991, there were 19 girls, and five boys – the first time the name charted for our sons.

Babies named for cars aren’t completely unknown, but Camry succeeds for many more reasons than the automobile.

Cameron has become a staple for our sons. We hear it for girls, too, sometimes re-spelled Camryn. And K versions appear, too. Originally, it’s a Scottish surname with a curious meaning: crooked nose.

But Cam names go way beyond Cameron and company.

Place name Camden and traditional Camila are two familiar choices. Imports and inventions like Kamari and Kamiyah dot the popularity charts, too.

In this context, Camry seems inevitable, an elaboration of Cam, a contraction of Camryn.

In fact, so many spelling possibilities exist that it’s tough to get a handle on exactly how many children answer to some version of the name. Just in the year 2020:

It’s possible that I’ve missed a spelling or two!

All tallied, this is just a little over 150 births in 2020. That’s far more that it first appears. And yet, that still wouldn’t take the baby name Camry into the current US Top 1000. (For girls, it took a minimum of 252 births in the calendar year 2020 to crack the list.)

Could there be other origins for the baby name Camry besides the car and the other Cam names.

The British East India Company listed Kamree Roads as one of their ports of call sometime between the 1600s and 1800s. Except it was probably Ramree, not Kamree. A World War II battle was fought on Ramree Island.

It’s in Myanamar today, and doesn’t seem like a promising source of inspiration, especially given the timeline.

Several sources hinted at a connection to mountains, and offered up poetic meanings borrowed from the natural world.

It is true that kam seems to refer to mountains, or perhaps a mountain ridge, in several Nordic languages. But

True that kam seems to refer to mountains in several languages. Swedish, Danish – refers to a mountain ridge, from Old Norse – but Nordic Names doesn’t list any Kam or Cam names on their extensive lists of over 48,000 entries.

And then there’s Núi Cấm, or the Forbidden Mountain. It’s part of the Thất Sơn range of seven mountains, located in Vietnam near the border with Cambodia. The mountains, in turn, belong to a large nature reserve in the Mekong Delta.

It’s considered both sacred and significant.

Around the year 1800, a prince sought refuge at the mountain. He’d eventually become emperor and found a dynasty. But back then, he was on the run from his rivals. To hide the prince, stories were spread about ogres and beasts dwelling in the mountains. Hence, the name – Forbidden Mountain.

And yet, it’s almost impossible to connect the dots from the mountain ranges of Vietnam to 1980s-era children’s names in the US.

The baby name Camry succeeds – in all its various spellings – because it just plain fits with how we name our children now.

Some of the spellings are probably meant to provide some distance between the Toyota and a child’s name. But if Bentley can become a mainstream favorite for our sons, this rarity doesn’t seem too tied to the garage, either.

The baby name Camry fits right in with unisex and surname-style favorites, from Aubrey and Avery to Sutton and Ellis, too.

What do you think of the baby name Camry? 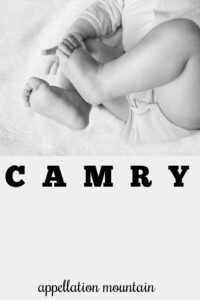