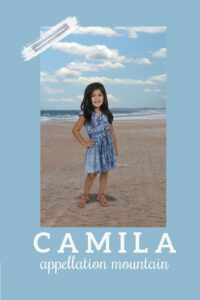 The baby name Camila is a fast-rising choice for our daughters, an English-Spanish crossover that feels equally substantial and pretty.

Thanks to Maret for suggesting our Baby Name of the Day.

Most sites suggest that the baby name Camila means something like helper at a religious service. That’s because the Latin camillus does, indeed, refer to a youth employed in a religious role.

But chances are that the old Roman family name Camillus predates Latin, and instead comes from an unknown Etruscan origin.

It’s also not related to the camellia flower. The bloom is named for Georg Joseph Kamel, a seventeenth century Jesuit missionary and naturalist who produced extensive written studies of the Philippine natural world. In Latin, his name became Camellus, and so when the eighteenth century botanist Carl Linneaus was naming plants, he gave them Kamel’s name.

But the similar sound doesn’t hurt.

In Virgil’s famous epic poem the Aeneid, Camilla was born a princess, daughter of King Metabus. He was driven from his thrown and chased to a river bank, holding his young daughter in his arms. To save her, he attached her to a spear, prayed to the goddess Diana, and threw her to safety on the opposite shore.

Camilla grew up a huntress, training as soon as she could walk. In the Aeneid, she’s an ally of King Turnus of the Rutuli. She dies in battle against the Trojans.

It’s not clear if Camilla’s story was a complete invention by Virgil, or an existing myth, or a little of both.

But it has endured across the ages.

Giovanni Bononcini’s opera Camilla debuted in Naples in 1696 and in London a decade later. It was a smash hit, the Hamilton of its day.

The name remained in use, especially in Italy, for generations.

Camilla Battista da Verano was born in 1458, and grew up in a wealthy household.

Her father wished her to marry well. But Camilla insisted on talking religious orders, eventually convincing her father to relent. She entered the Order of the Poor Clares as Sister Baptista in 1481.

Known for her scholarship, her writings influenced many. She was canonized in 2010.

But it probably wasn’t common in Protestant England.

At least not until pop culture gave the name a second lift in 1796.

Camilla was the story of the three Tyrold sisters. There’s Eugenia, Lavinia, and the title character, as well as their cousin, Indiana. All of the girls are coming of age, and must marry, with all the complications and drama that brings.

Because Burney wrote about her writing, we know that she first considered the names Ariella and Clarinda for her heroine.

The name gained in use in the English-speaking world.

The French form of the name, Camille, has also been popular in the US.

Royal watchers will hear this name and think of one figure: the Duchess of Cornwall.

Chances are you know the story. She was Prince Charles’ first love, but things were complicated. She married someone else; famously, so did he.

Many years later, Charles and Camilla made it official.

For decades, that’s made her the most famous bearer of the name. All of that changed in recent years, though.

The baby name Camila has been a smash hit in Chile, big in Mexico, and popular in Portugal in recent years.

While data is not consistently available across the Spanish- and Portuguese-speaking worlds, Camila seems to have risen in use during the twenty-first century.

The 2001 series is nothing like the 1980s sitcom about the Keaton family. It’s a drama, with all sorts of twists and turns.

Characters by the name also appeared in 2012 Argentine series Violetta and USA’s 2016 Queen of the South. The latter is adapted from Telemundo’s La Reina del Sur, but the character name only appears in the English version.

Telenovelas are very good at boosting names, but it seems like this was a both-and. The name was popular and parents were hearing it on television.

The most famous Camilas of our moment, however, were born before the telenovelas – though they’re still young.

Camila Cabello graduated from girl group Fifth Harmony to a successful solo career. She gave her first solo album the title Camila n 2018. The singer has gone on to act and serve as a coach on reality competion The Voice.

Camila Alves is a model and wife to actor Matthew McConaughey.

All of this points to the baby name Camila’s strong cross-cultural appeal.

It’s easily accessible in English, but every bit as gorgeous in Spanish.

Or maybe it’s better to compare Camila/Camilla to Sofia/Sophia, with Camille/Sophie in the mix, too.

Like Isabella, Camila is nickname rich. Cam and Cammy feel sporty and confident. Millie reads a little retro, while Mila or Milla are more of unexpected, even romantic ways to shorten the name.

The K spellings are sometimes used in Scandinavian and Slavic languages, too.

This name is a world traveler.

All of the has fueled the name’s rise.

So it’s clearly the single-L spelling that’s the powerhouse.

And a mix of high-profile celebrity, roots in ancient Rome, and centuries of use make this name feel strong, stylish, and headed for the top.

What do you think of the baby name Camila? 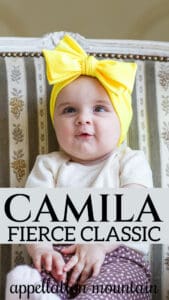 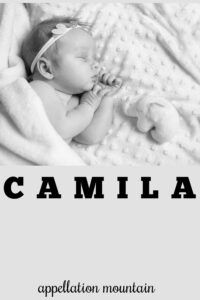