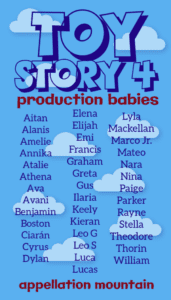 Toy Story 4 production babies range from the most traditional of names to the most surprising. That’s true for nearly every Pixar flick – the names feel every bit as creative and interesting as the movies themselves.

I’m still catching up! It hit me that I’ve never covered Toy Story 1, 2, or 3, to say nothing of so many other great DIsney-Pixar flicks.

But for now, let’s talk about the current blockbuster, the fourth installment in the beloved series that started it all.

As with every list, Toy Story 4 production babies include some time-tested classics. That’s especially true for boys, with names like Benjamin, Francis, Theodore, and William all making the list.

Other parents stuck with current Top 100 picks. There’s Ava and Stella on the girls’ side, as well as a Dylan, an Elijah, two Leos, a Lucas, and a Parker for the boys. (Of course, I’m guessing that Parker is a boy. But if it’s a girl it almost fits in the same category.) I’m not sure where to put Lyla, since that particular spelling is yet to break into the US Top 100. But if all of the girls named Lila, Lilah, and Lylah were tallied, it would be a powerhouse name of our moment – so I’ll include it here, too.

International names always feature on production baby lists, and this one is no exception. There’s Amelie, Elena, Luca, and Mateo, plus Marco Jr. It’s a mix of French, Spanish, and Italian, with lots of room for overlap – and, of course, the possibility that American parents simply embraced a name that’s loosely – or not at all – related to their family heritage.

Some of these names feel offbeat, but not too different. They’re broadly familiar, maybe even headed towards the US Top 100 – but they’re not there yet. Or maybe they would have been more popular ten or twenty or sixty years ago, but today seem a little fresh and novel.

Then come the names that fascinate.

Emi might be a spin on all those Emmy/Emme names, or perhaps it reflects Japanese roots.

Avani probably comes from an Indian name, derived from the Sanskrit word for earth.

We recognize Alanis thanks to the singer, whose parents chose it as a feminine form of her dad’s name, Alan.

Atalie strikes me as a mix of Natalie-hold-the-n and a play on the Old Testament Athaliah. Or maybe even yet another twist on all of those Adele names.

Ilaria seems like an on-trend rarity, Italian in origin but with a nod to the ancient Illyria, maybe?

The spelling of Rayne makes me think it’s probably a girl, but in our age of Reign and Rain, it’s hard to say.

Similarly, I’m guessing Mackellan belongs to a boy. It reminds me of celebrated actor Ian McKellen, known for so many distinguished roles, but perhaps most famous as Lord of the Rings’ Gandalf.

As for Aitan, it brings to mind two things: the girl’s name Aitana, borrowed from a Spanish mountain range. Or maybe Eitan, the Hebrew form of Ethan. My guess is for the latter, but it’s only a guess.

And then there’s Thorin, a name with Norse roots – and Tolkien-inspired ones, too.

What are your favorites from the Toy Story 4 production babies? Do you always stay until the very end of the credits, too?