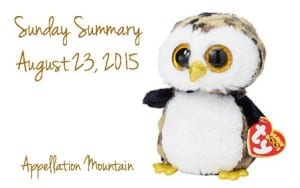 My son has acquired yet another stuffed animal. It’s an owl, named Owliver.

In the three days since Owliver has joined our household, I have been told that I’m saying his name wrong something like 2,023 times.

I’m willing to do it because, well, even though it’s a stuffed owl that my son bought for twelve bucks at Candy Kitchen, it’s still a creature with a name. And that’s worth … something.

But every time I force myself to slow down and clearly pronounce the “Owl” instead of just “Ol,” I find myself thinking of all those parents who named their kids Alivia instead of Olivia, or Ondreya instead of Andrea, hoping that the difference in spelling would lead to the desired pronunciation.

Like I said, it’s surprisingly difficult to arrest the vowel sound that comes naturally, and substitute one that is almost the same – but different.

That brings us back to England, where we started this list, so I think that’s a good place to stop for this week!

As always, thank you for reading – and have a great week!