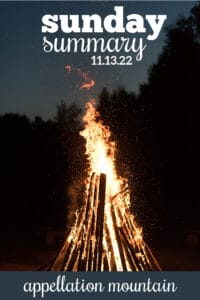 I love a good Name Quotes round-up from Nancy.

Reading the story about Amandla Sternberg’s name, I found myself thinking:

The story matters. And how you TELL it matters, too.

Amandla’s name looks like a creative twist on Amanda, but it’s not. It’s borrowed from an anti-apartheid rallying cry and means power.

Reading her account, you can tell that she’s proud of her name and that her parents did a good job of explaining the reasons behind their choice.

Maybe your story isn’t quite so dramatic.

Sometimes our child’s name is just the only name that we could agree on. But there’s a big difference between these two statements:

Well, we ran out of time, and it was the only name we both didn’t hate.

After looking for months, we realized this was the name we both liked best.

It’s the exact same experience, one that lots of us have had.

But how we frame it matters for our children – and for us!

I’m enjoying speculation about what Blake and Ryan will name baby number four … Swistle shares her thoughts here. I think I agree with the sentiment many have expressed: it’s un-guessable! (But that makes it incredibly fun to ponder …) Blake has a family name, and so it’s tempting to consider potential family names, like Beatrice, Gray, Ellender, Ernie, Chester, Lee, Ambrose, and Elaine. And, of course, there’s the theory that Taylor Swift revealed the baby’s name on Midnights …

Does Dasher work as a boy’s name? This couple is facing lots of backlash for their Christmas-inspired name. But honestly? If Dash and Asher are mainstream favorites, Dasher is one sleigh ride away from arriving in the mainstream.

Most people are flattered if we name our baby after them. Most … but not all. Because her sister wants to name a new baby after her … but the aunt-to-be is not comfortable with that idea. Good advice on how to politely suggest the parents-to-be take another approach, too.

Do you know MixedName? It’s a super-useful tool to find names that overlap between two languages. Clare mentioned it in her excellent write-up on picking a multi-lingual name.

A 46 year-old woman welcomed identical triplets. Amazing, right? But I know your question is my question. What did she name her new sons? Sky, River, and Bay. The three new arrivals joined older brothers Marcus, James, Christian, and Max.

Can’t get enough talk about names? Subscribe to the Tuesday newsletter: 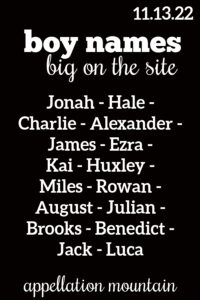 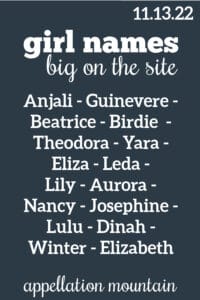