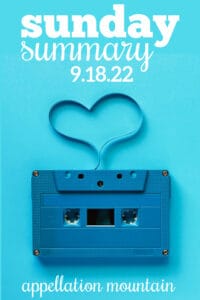 What’s the statute of limitations on pop culture references?

As my kids get older, I think about this All. The. Time.

Actors and movies and songs that immediately come to mind for me draw blank stares from my children.

Or at least they have to really search their memories for that one time they caught a snippet of the big Dirty Dancing finale.

And yet, some may balk at Felix because of the sitcom character from the 1970s hit television show The Odd Couple.

I think parents instinctively know this, and so our tendency to borrow names from the most recent series we’ve been binging or songs we’re streaming feels completely acceptable.

But it does bear repeating. Because it’s so easy to find The One name you both agree on … only for a Google search to have you wondering if you really can use it.

Most of the time, happily, the answer is yes!

Y’know how I often say “no one owns a name,” right? This story is the exception that proves the rule. If it would be incredibly hurtful to a close family member to use the name, then … yeah, it’s off limits. (In brief, this mama-to-be wants to use the same name that her brother-in-law chose for the daughter he lost three years ago. I’m honestly hoping the whole post is fiction, because really … how could you even consider such a thing?)

We say “don’t name your kid that, because he’ll be teased.” But it’s not the name. It’s the bullying. This mom gets it exactly right. (More on that here, including a point that takes us back up to the whole statute of limitations discussion.)

Are you the fancy name kid or the boring name kid? On TikTok, @erica_mallett suggests that every family has one kid whose name feels like it was thought of in “three seconds” and another kid “where they got really creative and treated it like an art project.” This feels weirdly true for me …

Nancy has the top names in Ecuador, and the list reminds me … We think of Liam as an Irish name. And it is! But it’s also wildly popular throughout the Spanish-speaking world, including Ecuador, where it’s the top name for boys. It’s also big in Argentina, Chile, and Spain. It’s climbing on BabyCenter’s Spanish-language site, too, rising to #3 in 2021, behind the most obviously Spanish Mateo and Santiago.

Can’t get enough name talk? Sign up for the weekly newsletter, sent every Tuesday, with naming advice and a fresh weekly list.