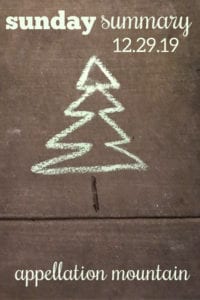 I have a teenager. This doesn’t make me especially wise, but it does make me humble. And maybe a little amused when I hear new parents talk about their plans for their children. It’s important to know your values, to focus on your family’s priorities and needs, and to proceed accordingly – whether that’s where you live, how you worship, or the names you choose.

And yet I wonder … do we sometimes use names as wishes?

When names reflect our family’s identity, then they’re good choices. Parents who love to hike and kayak and camp may very well call their child River. And that makes all the sense in the world. Even if your child grows up to be indoorsy, there’s a story behind the name choice that fills in the blanks.

Of course, plenty of names defy stereotypes. It’s a strength of the classics. There have been gamer Elizabeths and chemistry-class-loving Elizabeths and marathon-running Elizabeths and so on. Most Top 100 names reach this kind of status, too, at least within their era. I know lots of girls named Olivia and Sophia, so I’m not inclined to think that their names signal anything about them specifically.

If you’re considering mostly classic names or mainstream ones, you’re almost certainly exempt from this rule. But if you’re toying with the idea of a bolder, less conventional choice, stop and ponder whether it fits your family, as it is now.

If the answer is yes, then proceed.

And if the answer is no? My advice is simple:

Let the names you choose come from your family’s culture and identity, not from some imagined future. Our children surprise us in all sorts of ways, and the best names stretch and grow in every possible direction.

Will the Dolly Parton renaissance spark an uptick in babies named Jolene? I know a (lovely, accomplished) woman named Jolene, and she reports that YES, people sing the song when they meet her, and yes, it is SO annoying. This article contends that the rise of Dolly Parton – are you listening to the podcast? – is fueling a surge in babies named for her enduring song. I’m not sure the numbers bear out a big boost to the name – yet. And I generally think -lene names are still stuck in style limbo. (We’re all about the -lyns and the -lees these days, with the -lanis on the upswing.) But that could change, and I’m definitely among the Dolly obsessed lately. (Seriously, the podcast is so good.)

Calais Campbell pronounces his name … ca-lay-iss. Football (and basketball and really, most sports) draw me in because of the athletes’ names. My latest discovery? The Jacksonville Jaguars’ Calais Campbell, who pronounces his name NOT like the French port city, but with three syllables, including an ‘s’ sound. My initial reaction? That’s so wrong. But after I heard it a few more times, it grew on me. There’s a modest uptick in boys named Calais over the last few years, to a new high of ten births in 2018. Wonder if they’re ca-lay-iss, too?

The Art of Naming covers names from The Witcher. It’s a new Netflix series, based on a book series. I’m tempted to dive in and start watching … even more so after reading her list!

What were the defining names of the decade? Namerology offers a list of possible names, based on qualities. I mean … it sort of has to be Aiden and Olivia, right? Or … Aiden and Sophia? Nameberry released their top names of the decade, with Charlotte and Asher at the top of their lists. But those feel like names that still have a lot of mileage on them … especially Asher. It’s funny how tough it is to pin down a name of the decade, but then, maybe we always figure these things out after the end of the era.

Duana believes firmly that the adults in the household should name pets, and I am here for it. Our kids also received a letter this Christmas informing them that we’ve caved. After years of asking, we’re adding a canine companion to our family. (No, seriously. Both children gave me identical Christmas lists. 1. Dog; 2. Dog; 3. Dog. Then the little one upped the stakes and suggested a giraffe or a dinosaur. She’s cagey.) I’m prepared for naming to be a little bit of a battle, but I’ve made it clear that I retain veto power. And I’m citing Duana’s letter as support.

That’s all for this week! As always, thank you for reading, and have a great week. 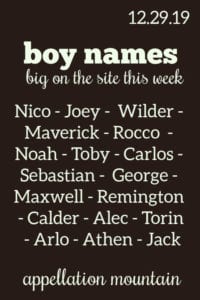 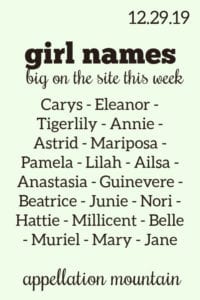