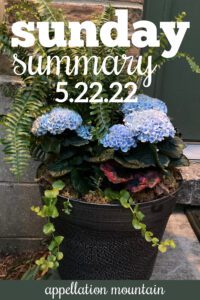 Do you name everything?

A great many inanimate objects exist in my house, all free of names. (I use the toaster oven daily, but I’ve never felt the impulse to call it Greg or Bob.)

But it turns out my kids are namers.

The plant in the picture is a lovely hydrangea I received as a gift. My son announced that it looked like a Louis.

And so now I find myself asking if Louis has been watered. And you know what? I’m far, far more invested in the plant’s health than I might otherwise be.

Kelli Brady’s annual Playground Analysis is back! Liam is now the #1 name, pushing Jackson to #2. Except … well, Liam is the top name already. Jackson is still the surprise, isn’t it? Adeline and Madelyn, Aiden and Kayden are still the stars on the list.

Two lucky breaks: first, this mom delivered her son safely by the side of the road after going into labor while running errands. And the second? They haven’t settled on a name, but the mom was near two streets – Porter and Wolf – when her son was born, so they have some excellent inspiration.

Good-bye Bob. And other names that once defined their generations.

The top names in Puerto Rico are interesting for two reasons: not only is it data, but it’s also a way of looking at English-Spanish crossover names. We think of Liam as Irish, but it’s actually the most popular name in Puerto Rico – and quite popular with Spanish-speaking Americans in general.

Can’t get enough talk about names? Sign up for the weekly newsletter, sent every Tuesday.