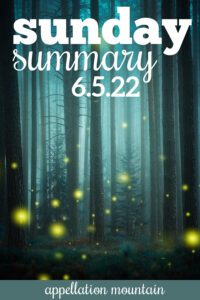 I’m old enough to remember hanging out with friends as young adults, pre-smartphones.

At the risk of sounding like I had a pet dinosaur, it could sometimes be much more fun.

We would banter about what year this movie came out. Or the right lyrics to that one song. The point wasn’t getting to the answer, exactly. It was to talk, aimlessly, about something light. Over coffee or drinks or in between innings and during intermissions.

Now such conversations are almost non-existent. They last exactly twelve seconds, before one (usually more) of us whips out a phone and delivers the facts.

Or, in some cases, the facts as the internet delivers them.

While I’m a fan of facts and truths, I also believe there’s an equally strong argument for mystery. At least for some decisions, it’s best to be content with something we can’t completely explain.

You don’t have to love a name for its meaning. Maybe you just love the way the name sounds when you say it. That specific combination of sounds and syllables feels right.

Can logic and reason lead you to the right name? Of course. A three-point, black and white answer as to why you chose a name delivers confidence.

But if you’re lucky enough to just know?

That’s every bit as valid.

Did you choose your child’s name with logic? Reason? Or a little bit of both?

Alabama, Momo, Mobius, and more name quotes from Nancy. Also, she quotes me on one of the most intriguing phenomenon – how parents discard names that are becoming “too popular” before they’re popular. Thanks for the shout out!

If you’re living the #vanlife, what better name for your daughter than Roam? Thanks to Tiffany for spotting this name.

A deep dive on the name Maverick. While it’s true that Top Gun’s release didn’t immediately send the name soaring, I suspect that this summer’s sequel could push it to new heights.

Speaking of names from movies, have you watched Disney Plus’ new release Hollywood Stargirl? It turns out the movie is a sequel to 2020’s Stargirl, based on a Jerry Spinelli novel. While she’s always called Stargirl in the movie (as far as I can tell), her real name is Susan. I’m not expecting Stargirl to be the next Maverick, but hey … I wasn’t expecting Maverick to be the next Maverick, either.

Can’t get enough name chatter? Sign up for the weekly newsletter, delivered every Tuesday: 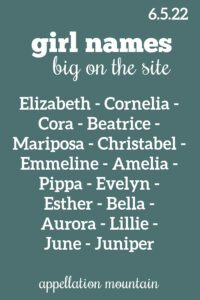 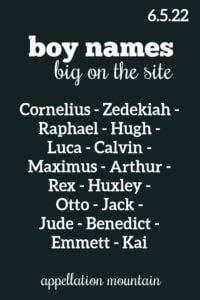