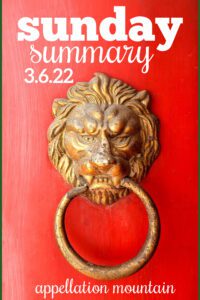 True to the prediction, March has roared in like a lion.

Earlier this week, friends and I were talking about something weighty. One remarked that the right decision doesn’t always feel right. In fact, it can feel awful. You find yourself wanting to re-think it, murmuring “What have I done?”

But sometimes we need to sit with a choice.

Growing our families inevitably leads to lots of big emotions. How could it not?

Names get wrapped up with so many other things – ideas about who we are and what we value.

It’s easy to dismiss names as decorative accessories. Bracelets. Throw pillows. But that’s not true at all!

Names carry all of our ideas and worries about identity, meaning, family, faith – it’s not just sounds and letters.

And so – assuming you have the time – if a name decision feels not-quite-right, consider the possibility that it’s just roared into your life. You’ll need to sit with it for days – or even weeks – to know if it’s right.

You don’t need me to tell you that there’s been a sea change in how we name our boys. Laura Wattenberg points out that we’ve now gone from boy names ending with N to boy names ending in vowels.

This letter to Swistle raises so many interesting questions. My take: it’s totally fine to name a daughter after her mother. And Swistle is right about surnames, too.

I’m not watching The Last Kingdom, but maybe I should be? We’ve been talking about the influence of Vikings on names for a while. Could this bring back the Anglo-Saxons? Uhtred is kind of a non-starter, but Alfred could be great.

Zazie, a sister for Otto! What a great sibset, as spotted in the most recent British Baby Names birth announcements. Zazie sounds a little invented, doesn’t it? But it’s got plenty of history, beginning as an Isabelle nickname, right up to actor Zazie Beetz.

The data from South Africa this year is fascinating. Instead of releasing a single set of national data, South Africa released information by province – nine lists in total. Nancy attempted to aggregate the names, but there’s some guesswork involved. My knowledge of South Africa is woefully lacking, but what I learned from Trevor Noah’s biography is that there are LOTS of languages spoken. (Google tells me it’s ten official, plus English, and more than two dozen more that are significant.) Anyone know more? I’m so curious about why they made the change.

Can’t get enough name talk? Sign up for the Tuesday newsletter.