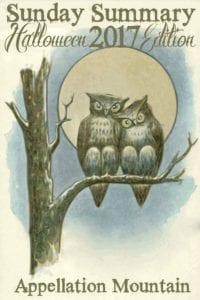 I finally watched Hocus Pocus, the 1993 Disney flick about the Sanderson Sisters: Winifred, Sarah, and Mary. Because it’s been such a go-to favorite over the years, I felt like I must have watched it before – but nope. Winifred – currently competing in the Halloween Baby Names 2017 final – prompted me to hit play. But the name that really drew me in? Thackery, the young boy from 1693 who plays a key role in the movie. I mentioned this name way back in 2011, after Bree’s former site covered it, with a nod to the film. (Bree now writes here.) It’s a great choice, though, picking up on Theodore’s Th- sound, as well as former chart-topper Zachary and all of those longer names for boys.

Other notables: Thora, as in a very young Thora Birch and Omri, as in Omri Katz, who played Max, the boy who (spoiler alert) ultimately saves the day. 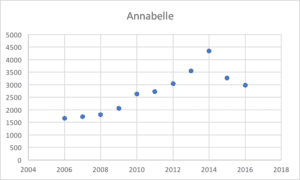 While we’re talking all things Halloween, can we take a look at Annabelle? It’s always carried a hint of Gothic, thanks to Edgar Allan Poe’s melancholy poem “Annabel Lee.” But now it’s the name of this generation’s favorite demon-possessed doll, at the center of both 2013’s Annabelle and 2017’s Annabelle: Creation. You might think that something like that would depress a name’s use, but the picture isn’t clear. The name peaked in 2014, the same year Annabelle hit theaters. (Strictly speaking, the movie owes its history to 2013 horror film The Conjuring, where the evil doll is first mentioned by name.)

While Annabelle has declined in use since, it remains more popular than in 2011. So was the rise in use due to the movie? Or does Annabelle get credit for the recent drop in use? Or are we simply tiring of -bella/-belle names just enough to explain the decrease?

After all, The Exorcist pushed Regan into the girls’ Top 1000, along with Reagan.

I suppose the question really comes down to this: if you had Annabelle on your shortlist, was the movie enough to make you reconsider? 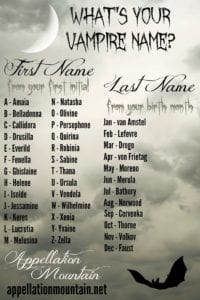 One more piece of Halloween fun before we move on: What’s your vampire name? I’m Amaia Bathory. That sounds appropriately vampiric to my ears, but I’d really like to be Ghislaine Lefevre or maybe Natasha Drogo. Or Persephone Merulla or … I’ll stop there. Ever since I started mulling over the difference between witch names and vampire names, I’ve found them drifting into my head all. the. time.