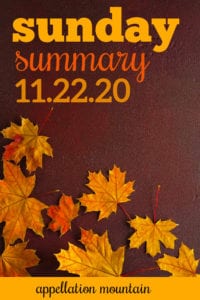 First up: Laura is taking nominations for the Name of the Year over at Namerology.

This means two things: first, we have almost made it through the minefield of 2020. (Maybe?! Thinking I should go knock on wood now before a meteor strikes …) But secondly, I love names as a time capsule. Harvey, Renesmee, Shiloh. Even Boaty McBoatface. Knowing the names that dominated the headlines tells you something about the moment.

My nomination for 2020 would be Kamala. Partly because of the historical significance of Kamala Harris’ election. But mostly because of how her candidacy put names in the spotlight – particularly how often people with non-Western names find them intentionally mispronounced. And just plain dismissed.

Which I cannot comprehend. Because if you’re from another place, I want you to come sit next to me and tell me everything about how names work in your culture.

I’m so glad Duana suggested Elsa. This name has been trapped in the castle at Arendelle for far too long. She’s a heroic figure, has a stirring theme song – wait, make that two stirring theme songs – and her name? A great contracted form of Elizabeth (or, I suppose, Elisabeth) that fits right in with Emma and Ella, but still stands out.

Duana also mentioned Anya Taylor-Joy of The Queen’s Gambit. I’ll keep this spoiler-free, but let me just say: I think Netflix hit it out of the park. And Anya is one of those names that I consider a hidden gem. (It briefly made it into the upper 300s from 2007 to 2009. But it’s an international spin on Anna that deserves a closer look.)

The popular names in Paris are great, but check out the bottom of the list. Castille, Isaure, Corentin. Swoon!

Ready to look ahead? Delphina Moon’s series on what’s next for some of the most popular names is a good place to begin. This is the first installment of her boys’ series. You can find more posts on her site.

Speaking of looking ahead, what’s next for Atticus? Parents worried that the hero of To Kill a Mockingbird was far less sympathetic in Go Set a Watchman. But the name survived that test and surfaced in other places – like the later seasons of Downton Abbey. And now it’s the main character’s name in HBO’s Lovecraft Country. (Complete with unexpected nickname Tic.) I wouldn’t have thought so even two years ago, but lately I’m wondering if Atticus could eventually edge into the US Top 100.

That’s all for this week. If you’d like more name chatter, be sure to subscribe for my weekly newsletter, sent every Tuesday.